Earlier this year, I introduced you to one of my heroes in my Writer’s Life post “TheSocks Must Go.” Well, Rhett, my huntsman who hates his new wife’s hole-ridden socks, is making his literary debut on August 31st and his book is available for pre-order on multiple ebook platforms. The paperback will be available for order on Amazon on the 31st as well. 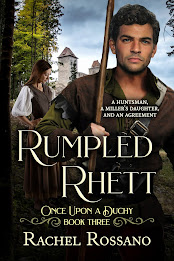 So, as a treat, I am going to offer an unshared excerpt from the novel below. This is before the infamous socks incident and immediately after all parties have agreed to the arranged marriage and accompanying deal. They have removed to a tavern for a meal, and all the men, except Rhett, have begun a celebratory round of drinks.

Cat has slipped into her usual place, sitting in the shadows far from the action in the center of the room.

The stranger (the Huntsman) was huge, tall, broad-shouldered, and very clearly at ease with his ability to physically intimidate. I had been watching Osbert (the reeve’s man of business) fidget and cough his way through their discussion. From the scribbling, the paper shuffling, and the Huntsman’s grim expressions, they were probably discussing the contract. Still, the Huntsman never relaxed into his seat. Those dark eyes routinely scanned the room, locating and noting the orientation of each of us, even me. No one ever kept track of me. I wasn’t sure I liked the fact he kept glancing my way.

Then, the tavern keeper’s wife appeared with his dinner. The smell of cooked meat, flaky pastry, and savory vegetables filled my nose as the woman passed with the two loaded platters. My stomach roiled and growled in anticipation of food, but I ignored it. The meal wasn’t for me. It was never for me. I would eat a few scraps of whatever remained from the midday meal when I returned home if my brother didn’t get to them first.

The Huntsman stood. I felt the occupants of the room tense, well, the still sober ones. Keeping my face tilted slightly down as though I studied the table, I watched him from beneath half-lowered eyelids. He spoke to the tavern keeper's wife and then Osbert. Whatever he said pleased Osbert. I hadn’t seen the man smile in ages.

A flurry of movement to my right drew my attention. Bess was on her feet. Red lips puckered, hand on her hip to emphasize her curves, and a come-hither flutter to her eyelashes, she was ready for the stranger to notice and respond to her unspoken invitation.

That must have been why he rose. I had noticed his gaze hesitating briefly in the women’s direction a few times.

Unwilling to watch Bess land another conquest, I dropped my attention to my hands. Chapped and raw, they needed more salve. Tomorrow, I would seek out Widow Louisa and ask for a refill of the jar she had given me last year.

The rough, deep tones resonated in my bones as my head snapped up in surprise. I just blinked at him for a moment. Why was he here? Bess wanted him. What Bess wanted, she took.

“Nod if you can’t find your tongue, or Osbert might attempt to murder me.”

He chuckled that odd rusty laugh of his and set his mug on the table between us. Strangely, the liquid inside didn’t smell of ale or cider. He placed the platter of food next to the mug before turning around to look for a chair. Moments later, he was sitting just around the side of the table to my left, his knee almost bumping mine.

I tucked my knee further under the table.

Despite the fact he made no indication that he had noticed my movement, I had the impression that he observed it all. I suspected that nothing slipped his notice. Instead of commenting on my avoidance, though, he calmly leaned back to untie a pouch from his belt before dropping it on the table. Then, inclining forward with companionableness as though we were the best of friends, he began rummaging through the interior of the bag.

“I have something for you.” His long fingers pulled out an even smaller pouch. This he spilled onto the tabletop beneath the protective curve of his other hand. No one could see the contents save the two of us. It was just as well because my brother and his associates might’ve been very tempted to do something rash if they could. A small pile of gold flans, three signet rings clearly made for large male fingers, and an intricately detailed moonflower made of silver and gold. From the midst of this collection, he plucked a delicate band of gold. Fashioned in the likeness of a vine, it curled in and out, winding around itself in an endless circle.

“What is it?” The question slipped out before I could hold it back. Surely he didn’t intend for me to wear it.

“A symbol.” He met my gaze. His eyes weren’t black or even brown. They were a blue so dark and intense that it swallowed the light. The color reminded me of the evening sky as the light faded, taking the wild, colorful sunset with it. The blue of the sky right before the blackness of night crept across to rule till morning.

“A symbol of what?” I fixed my attention on the ring instead.

The reverence in his voice made me glance at his face again. Strong features, a rather large nose, and a defined chin gave him a face that could not be called handsome, not that there were many handsome men for me to compare him to. His face fit the rest of him, clearly masculine and intimidating without being ugly.

He continued. “It was given to my grandmother by my grandfather and then passed down to my father. He gave it to my mother. It is one of the few things I still possess that I know for certain was my father’s.” He set the ring on the table next to his mug before sweeping the rest of the expensive trinkets back into the tiny pouch. He returned it to the larger bag. Then, he plucked out another small pouch, which he set on the table too.

“Master Huntsman.” The tavern keeper approached the table hesitantly. “The food you ordered.” Setting a platter slightly smaller in size and content before me, he cleared his throat expectantly.

“Would you prefer ale or cider, Cat?” the Huntsman asked.

“I don’t drink ale,” I reminded the tavern keeper, not that he would know since I never frequented the tavern.

“I thought as much.” He motioned to his wife, who brought a mug of cider and set it before me. “Is that all?” he asked my companion.

“Yes, thank you.” The Huntsman didn’t bother looking up from whatever he was doing with the new pouch.

The scent of cooked meat filled my nose, making me dizzy.

I glanced at him. He hadn’t even looked my way. Instead, he was fully intent on pouring some dried leaves into a small ball made of metal mesh attached to a delicate chain. This he closed and dropped into his mug, clasping the chain around the handle so it didn’t disappear into the liquid in his cup.

He closed the pouch and returned it to his bag, reattaching it to his belt. “Tea.”

“Are you ill?” He didn’t appear sick.

“I only drink willow bark tea when I am sick.” My nose wrinkled of its own accord. I hated the bitter taste.

“This isn’t willow bark tea.” A flick of his glance my way with a slight smile made me blink.

“A combination of a couple spices and herbs. A friend of mine makes it for me. Would you like to try?”

The smell rising with the steam from his cup was tempting, but I wasn’t in the mind to take another risk this day. “Perhaps another time.”

“I realized that I didn’t ask you.” He stirred his tea with a spoon.

I frowned at him. “You asked me if I was certain.”

“And you said you didn’t have a choice. I am giving you a choice.”

I frowned down at the ring. It lay on the rough-hewn tabletop, glinting faintly in the dim light. Around us, the crowd roared with laughter at someone’s joke, and the women in the corner chattered. Meanwhile, the man next to me waited. His calm silence enveloped us, stilling the panic that had been breaking over me in waves. Perhaps this might not be as bad as I feared.

To find out her answer, you can pre-order the book here.