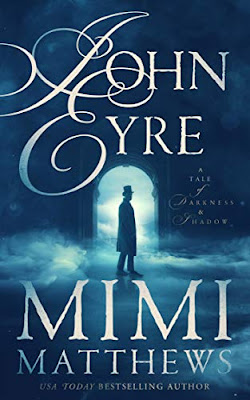 While retellings of Jane Austen’s novels are plentiful, I’ve encountered fewer reworkings of the works of the Brontë sisters. So I was pleasantly surprised to hear the word spreading about John Eyre, a new rendition of Jane Eyre. As a novel in the Gothic tradition, Jane Eyre is well-suited to the addition of a supernatural elements which Mimi Matthews infuses into her version of the classic tale, taking it into the realm of speculative fiction.

John, our protagonist, is a kind, well-educated man fleeing a painful past. He comes to Thornfield, home of Mrs. Rochester, to serve as tutor for her adopted sons…and finds nothing there is as he expects, beginning with the boys themselves, who appear as though they’ve fallen victim to a terrible wasting disease. He’s determined to see them hale and whole and bends his energies in that direction, despite the peculiar happenings at Thornfield.

I appreciated that John has a strength which comes from a gentle, steadfast nature, in contrast to Bertha Rochester’s more tempestuous determination. The layered approach to unfolding the reality of the situation in the Rochester household drew me along, and though I guessed fairly early the nature of the supernatural villain, the unfolding was still intriguing. Many elements of the story will be quite familiar, but the story still feels fresh and compelling.

As a gender-swapped retelling of a classic with a chilling Gothic flare, John Eyre provides a page-turning read. I’d recommend it for those who enjoy speculative fiction, even those who aren’t huge Jane Eyre fans—however, knowledge of the classic story as well as folklore will enhance your enjoyment of the novel.

Have you read any Brontë retellings? Do you enjoy Gothic literature?

CONTENT WARNING: There are a few instances of bad language as well as several passionate kisses.