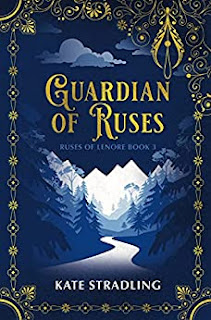 “The empire was dying. Its murderer lay in the heart of Lenore. If she could not sacrifice her own safety to free her nation from the evil that preyed upon it, she deserved every unkind word, every skeptical sneer she'd ever received…”

When a tender-hearted assassin-in-training Rosia accompanies an invasion of Lenore, she has one goal: kill the Eternal Prince and save her people. Never mind that she has yet to successfully harm a living soul, she’s determined to find a way.

She’s always given her full devotion to her country—despite the treatment she’s received in return—but when the best laid plans go awry and she spends longer than expected in Lenore, she finds herself questioning long-standing beliefs. Few things are as they appear. But making changes is never easy, and Rosia is in for more than her share of turmoil and heartache as she confronts secrets on every side—her own and others.

Guardian of Ruses incorporates the enemies to lovers trope, which I love if it’s handled well (as it is in this tale). Rosia and the man she comes to care for are both endearing characters and watching them sort out their feelings and loyalties makes for engaging reading—as do the delightful twists along the way.

The world and the magic it contains have a bit of a fairy tale feel to me, yet there’s also real thought put into politics, policies, and inter-kingdom relations, which I appreciate.

The secondary characters add depth to the tale, and for those who have read the first two books in the series, Guardian of Ruses offers a nice glimpse into the lives of previous protagonists and how they (and the kingdom) have fared in the ten years that have passed between stories. It’s possible to read Guardian of Ruses as a standalone, but it will be a much richer experience if you go through the series in order. The entire Ruses of Lenore series is delightful, so if you haven’t read it yet, definitely check it out!