This coming February, I am releasing my first novella under my new pen name, Elisa Rae. Set in a world full of fantasy species, the series will be full of healthy romantic relationships, noblebright characters, flirting, humor, and just enough drama to keep things interesting. My goal is fun and quick, quality reads.

The first novella is already up for preorder. This week’s snippet is from the middle of the first chapter and written from my heroine’s POV. The setting is Spymaster Whispier’s study, and Avril’s goal is to steal a specific dagger for her master, Grimore. 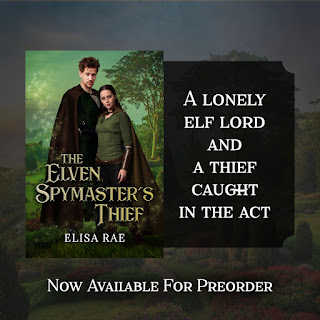 The moment my eyes fell on the dagger, I knew something was very wrong. The thing was ugly, roughly made, and hardly even functional. Why did my master send me into the den of the greatest mastermind in Eldarlan to steal a child’s toy? I squinted at it. It was not even an enchanted toy.

Still, I had my orders. My life and livelihood depended on fulfilling this mission. Grimore wouldn’t tolerate anything less than absolute success. Letting out the smallest of silent sighs, I approached the table. I ascertained that it hadn’t been boobytrapped either magically or otherwise using all of my observation skills.

Well, here I go, I thought. I reached across the table and lifted the small dagger from its display.

“Are you sure you want that one?”

I jumped. My heart threatened to leap from my chest. For one frantic moment, I feared I would die from fright. I whirled toward the voice. Anger replaced panic in an instant. “Are you trying to kill me?”

“No.” He was lean, but there was a substance to his frame, unlike most elves I had seen from afar. Muscle across the chest and shoulders gave his long lines a dangerous power that had nothing to do with magic. His piercing green eyes assessed me with a sharpness that made me want to flinch away. Unlike most of his kind, he had cropped his brown hair instead of letting it flow down his back. The tapered curls did nothing to hide the pointed tips of his ears. His clothing also had a simpler cut, but the fabric was no less fine. It hung in elegant lines, accentuating his feline-like movements as he stalked across the hardwood floor. “I was merely curious.”

“Whether or not you could shock my heart into stopping?” I backed up until my hips hit the edge of the table behind me. I still clutched the sheathed dagger to my chest. After all this, I had no intention of leaving without it.

“Human hearts are fragile, but I have never known one as young as yours to stop due to shock. Blade, curse, poison, draining, or ripping it from the chest, yes. Those can kill, but fright, no.” He held out his elegant hand. “Give me the blade.”

“No.” Unnerved by how unfailingly he stared into my eyes despite my bespelled cloak and the mask obscuring my features.

“I could take it by force.”

“You will lose more than you gain in the process.”

His impassive features moved. An eyebrow rose slightly as though intrigued. “I am stronger than I look.”

I snorted. “So am I.” I slid my favorite blade from its hiding place without letting go of the useless one I was trying to steal. There was no way this thug of Whispier’s was going to relieve me of my prize, elf or not.

In an instant, before I could react, a long thin stiletto flicked into his fingers, and the cool edge of the blade rested against my throat. “I am faster.”

A twitch near his eye broke through his stoic mask. “But?”

I leaned slightly back from his blade, giving me the ability to swallow. His eyes narrowed as he watched the movement of my throat. I used the distraction wisely.

“Speed isn’t everything.” I pressed the edge of my deadly iron-laced blade to his gut, perfectly positioned to drive it straight up into his stomach at the slightest provocation.

To my surprise, the corner of his mouth twitched, and he stepped closer. “I doubt you will have time to follow through on that threat. A quick flick of my wrist, and you will be dead in seconds.”

I stared into the mysterious depths of his enigmatic spring green eyes. He was close enough that I could see the blue flecks near his pupil and the ring of silver around the iris’ outer edge. I could also feel him. His deep, even breaths fluttered against the mask, bringing the scents of trees, fresh air, and the promise of something inexplicable. A tingle of wild magic different from the comfortable brownie charms on my cloak invaded my head. A sleep spell! It whispered sweetly of warmth and comfort, tempting me to relax.

I closed my eyes. Abruptly the sensation ceased. I jabbed my knife into his gut, not hard enough to break the skin, but enough to get him to back up ever so slightly.

“Your death will be more painful,” I growled as I opened my eyes to glare at him. The spell was still there, trying to invade my head again. However, now that I was aware of it, I could resist it.

“I will heal.” Something changed in his eyes.

“But you will suffer while you heal.” I frowned. What had changed in his eyes? Laughter? “You are laughing at me!” I shoved at his chest hard. He complied, but the way he did it—moving long enough after I pushed—made it clear he was doing it because he wished, not because I forced him to.

He tossed the blade in his hand. It disappeared into the air. The magic was so neat and tidy that the blade blinked out without a sound, flash of light, or puff of air. It was hard not to gape in wonder at the trick. And he knew it. His mouth quirked briefly. “You will stay.”

“I beg your pardon?” I glared at him. “I am going to take this and leave.”

“You will find that impossible.” He turned his back on me, clearly not caring in the least that I was still armed. Prowling over to the large desk before the great windows opposite the door I had entered, he started flipping through papers. “What is your name?”

“I don’t see how that has anything to do with the matter.” I knew about the tricks the elves and other fae played once they knew a person’s name. There was no way he was getting mine.

“Family name then, paranoid one.”

“Ah, I thought so.” He straightened, a strange pen glowing in his hand. “You have a brother.”

“He contracted himself into Whispier’s service.” I emphasized the name. Why would I deal with an underling when it was Whispier I wished to hurt for taking Solon from me? “I don’t know who you are.”

This time his eyes lightened. “Do you want to free him?”

I pressed my lips together to suppress the urge to scream at him. I glared at him instead. “Why do you ask?”

“That is a yes then.” He plucked a document from the air. The glowing edges gleamed despite the dimness of the room. “What if I offer you a bargain? Your brother’s freedom for your companionship.”

“Friendship, conversation, company—nothing untoward or physical beyond being in the same room frequently.”

“Only Whispier has that power,” I pointed out.

He tilted his head slightly to the side. “I am Whispier. The fact you haven’t figured that out yet doesn’t speak well of your intelligence.”

His mouth did the funny little quirk again. “You might find me hard to kill.”

I eyed him from beneath raised eyebrows. “Is that a challenge?”

“You won’t be able to kill me. The bond will prevent you from attacking my person.”

“What about maiming? Poisoning? Papercuts?”

I just grinned at him.

“Besides, I heal quickly.”

“How about cuts from iron-edged paper?”

“That is a myth, you know.” He turned his attention to the glowing edged document. “Iron only gives us a stomachache.”

I snorted. “Maybe I will just make it so you wish to die.”

A soft sigh of air whispered through the room, and suddenly there was a third presence. The shadow elf from earlier materialized next to Whispier. What had Whispier called him—Casimir? He no longer appeared to be a solid black shadow. Like Whispier, he was tall, lean, and dangerous. Unlike the mastermind, his skin was a dusky brown. His pale green eyes, almost precisely the same shade as Whispier’s, flicked from side to side, assessing the two of us.

“Are you quite finished?” he asked the mastermind.

“Almost.” With a flick of his slender fingers, he flipped the document to face me. “Our agreement. Your friendship in exchange for your brother’s freedom from my service. Your every need will be provided for—food, clothing, housing—in exchange, you will attend me here in my study or other public rooms in the palace.”

“And do what?” I demanded. It sounded too good to be true.

He shrugged. “Talk, eat, ignore me, whatever you wish.”

He waved the paper impatiently. “Should you wish. Do we have a deal?”

“And Solon is free?”

“The moment you sign this.” He offered the glowing pen.

“What about my current master? It isn’t as though I am a free woman.”

“What is your master’s name?”

His eyes flared silver and he tilted his head to the side. “Interesting. And the nature of your contract is?”

“Thievery in exchange for room, board, and protection.”

“Protection from what?” His impassive features tightened. “Do you have a price on your head?”

“Not that I know of. He keeps me safe from those who would prey on a lone woman.”

“I can provide that.”

I snorted softly. “And who will protect me from you?”

“The agreement will. I bound it into the clauses that I cannot touch you with the intent to hurt or take advantage. The spell will hold me to it.”

I had heard of spells reading the intents of a person’s actions so that made sense. Food, shelter, protection, and all I had to do in exchange was keep a man company. It sounded almost too good to be true. But then—

I took the paper and read the terms. Solon would be free. I signed the document in glimmering silver ink that appeared to absorb into the paper as I wrote. With the last stroke of my name, I felt the bond take hold with a tingling jolt of magic. The paper disappeared as abruptly as it appeared. Whispier muttered something in Elvish. The shadow elf rolled his eyes and disappeared in a soundless rush of displaced air.

Does it sound like a good deal to you?