The Wraith and the Rose by C.J. Brightley (Lizzie)

As a longtime fan of the classic masked-hero story The Scarlet Pimpernel (both the book and the movie), I was excited to learn that C.J. Brightley of Noblebright.org was writing a fantasy retelling. It has a Victorian setting, and the fight is against the fae, who are stealing children. If you're not familiar with The Scarlet Pimpernel by Baroness Orczy, it's set during the French revolution. A beautiful, witty French actress married a fashionable Englishman only to realize he's empty-headed and dull. In truth, he's the daring Scarlet Pimpernel, whose incredible rescues of French aristocrats from the guillotine have incensed the French leaders. They send a clever investigator to find this rescuer among the nobles of England. The investigator was once an acquaintance of the lady, who is wrongfully said to have caused the deaths of a French family. Our hero learns on his wedding day the lie of her betrayal of that family and vows to keep his emotional distance from the object of his adoration. All ends well, of course. It's a delightful book and movie (the Jane Seymour version is my favorite). 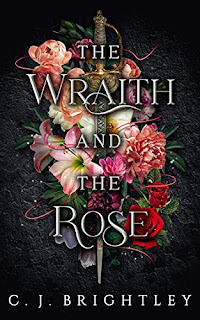 A Scarlet Pimpernel Reimagining with Fairies and Magic

The Fair Folk are stealing children.
One man is stealing them back.

When Miss Lilybeth Rose Hathaway and her family arrive in Ardmond for the season, Lily can’t help but be charmed by wealthy, popular Theo Overton’s lovely manners and genuine affection. The Hathaways are soon elevated far beyond what they might have imagined, and like everyone else, they are captivated by rumors of the national hero known as the Wraith, who is saving human children from the terrors of the Fair Court.The arrival of the Special Envoy of the Fair Court tasked with capturing the Wraith frightens everyone. But the Wraith is far too clever to be captured… until the stakes become personal.The Wraith and the Rose is a delightful reimagining of The Scarlet Pimpernel in a Victorian-inspired setting with dangerous Fair Folk and a love worth dying for.

If you enjoy sweet romance with near-perfect heroes, rich descriptions of fashions and foods, manners and the language of flowers, then you'll enjoy this book. If you're looking more for the swashbuckling daring-do and cleverness of the rescues of the movie version of The Scarlet Pimpernel, you'll likely be disappointed. This is a book for the romantics. I admit I was hoping for a greater sense of danger and cunning, but the author seemed to be avoiding that as much as possible, going for light descriptions and only telling us of the danger. The Veil (the passage between the human and fairy worlds) is said to be dangerous, but I never felt the danger. We're told it has dangerous creatures and may glimpse them, but it felt more like something tossed in because there should be danger than a grounded part of the story. In at least one rescue of the stolen children, the hero, in disguise, merely bullies the guards into letting him have the children. I could see that happening early in the Wraith's/Rose's rescues, but not when the fae are desperately trying to catch him. They would be looking for something like that, I would think. The reason for the rift between the hero and heroine also wasn't convincingly serious either. The greatest grievance, though, in my opinion is the lack of the clever ditty about the Scarlet Pimpernel; it's fun to repeat and was a great part of the movie version as the hero uses it to mock his rival.

I did still like the characters in The Wraith and the Rose, though they were a bit too sappy sweet and shallow-feeling for my taste, and reading the book brought back fond memories of the original story. For me, it just focused on the aspects I wasn't so fond of in the original--the hero's worship of the heroine and fashion concerns. This is a retelling for the romantics.

You can purchase it here: The Wraith and the Rose

Email ThisBlogThis!Share to TwitterShare to FacebookShare to Pinterest
Labels: C.J. Brightley, Lizzie, The Scarlet Pimpernel, The Wraith and the Rose, Weekend Reads