They say you shouldn't judge a book by its cover, but let's face it: we all do.

Or at least, we are drawn to books because of their covers. This was especially the case for me with my recommendation for this weekend's read: Gretchen and the Bear.

Those of you who have been following the blog for a while know I don't often read fairy tale retellings; not because I don't like them but because my go-to flavor of the genre is epic fantasy. However, Carrie Anne Noble and I are members of the Realm Makers tribe of authors, and I had seen the book's cover often enough in group circles to recognize it on sight. It called to me each time I encountered it until, in a bit of an emotional funk and wanting to escape into a fantasy reminiscent of those I read when I was younger, I decided the pastel colors and girl-riding-a-bear silhouette looked as though it would satisfy my longing for a bit of nostalgia.

I was enchanted almost instantly because the setting of the story does something I've heard of but have yet to experience: it blends science-fiction and fantasy. 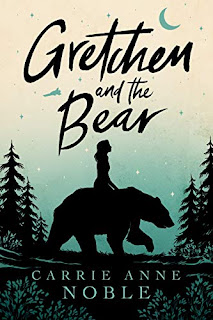 Gretchen and the Bear is set in a future where humanity has destroyed the planet and must live on an orbiting space station. After the last human leaves, the fey who remain on Earth regenerate it. Once it is again inhabitable, the planet is divided into human-inhabited North America and fairy-dominated Britannia. But the fey openly despise humanity, and no one who travels to Britannia ever returns.

Unfortunately for sixteen-year-old Gretchen, her step-sister Ruby has run away to Britannia to meet her fairy boyfriend. Gretchen's step-mother has sent her after Ruby with an ultimatum: if she doesn't bring Ruby home, her father will die.

Forced to search a magic forest filled with hostile fey for a sister who doesn't want to be found, Gretchen is lost and desperately in need of help when she happens upon the cottage home of a family of bear shape-shifters and gets mistaken as the heroic Silverhair of Bearfolk legend. The mix-up completely blindsides Gretchen's search, forcing her in a new direction that turns all of her goals and plans upside down. And just when you think the story is over, it moves in a direction that's unpredictable yet true, which made the book very satisfying.

Gretchen and the Bear is exactly the type of story I was looking for. The blend of science-fiction and fantasy is masterful and the fairy tale elements are true to the genre without being cliché. This is one story you don't want to overlook.