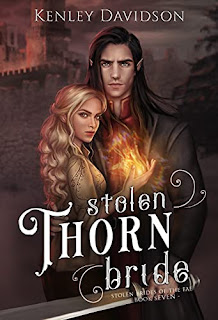 Stolen Brides of the Fae is a series of eight standalone short novels by eight different fantasy romance authors published over the last two months. Each book offers a unique take on the concept of the Fae and the legends of their stealing humans away to faerie lands. While I haven't read every book in this particular series, Stolen Thorn Bride by Kenley Davidson definitely stole this reader's heart.

While this is the seventh book in the series, you do not need to read the others in order to fully enjoy this one as it is completely standalone and set in the same world as Davidson's Legends of Abreia (fellow blogger Rachel reviewed the first two books). If you haven't read the main series, don't worry. You will not be lost or confused by the world building. On the other hand, if you have already read Legends of Abreia, there's some fun in knowing a little more about the wider world.

I've read a number of elf-human fantasy romances including those with reluctant or arranged marriages and a common trope is the human girl believes "elves/fae are monsters because the rumors say so" and she just refuses to let go of that idea for a good while. One of the things I really appreciated about Thorn Bride is Kasia does not have this attitude because it's not my favorite trope for romantic conflict. She views the elves as mysterious (since they've been walled off from human lands for a century) but also loses her patience when confronted with a touch too much elven condescension and embraces the "affront" of being a pig keeper about to be married to a king. And the way she handles it is perfect because it's humorous but not abrasive when she stands up for herself.

Dechlan is my favorite thing about Thorn Bride! He is one of my favorite character types as the tall dark and stoic who is also the noble warrior. I love these characters and he is one of my absolute favorites even though he can be conflicted (partially due to the lost first love aspect) and is scarred by the circumstances of the war wound that caused his unexpected and unwanted marriage to Kasia. I love how protective he is of Kasia and insisting others show her the proper respect even when he doesn't believe he can love her or that she'll love him. Swoony noble warrior for the win!

While Thorn Bride is built on the trope of Stolen Brides (tied to both Fae legends and myths such as Hades & Persephone), Stockholm Syndrome is not an issue in this book since Dechlan was not involved with Kasia's being trapped in elven lands nor did he shrug off the reality of her culture shock OR the less than honest means used to get her to agree to the soul bound (marriage). And even when he is angry about their marriage, he pointedly admits it would be just as bad to take it out on her. Even when they're both unhappy with the situation, they stay fairly respectful (although Kasia is bluntly sarcastic in the beginning...for very understandable reasons) of each other and I love that they weren't simply being cruel to be cruel.

I adored the secondary characters of Aral and Tiernan as well as how they each bonded with Kasia. While this is a shorter novel, the world building provides lovely background and nuances to this previously unexplored corner of the Abreia universe. The plot of the beleaguered elves fighting against an ancient enemy for a century provides the perfect vessel for Kasia and Dechlan's journey including her acceptance of her own secret. The romance is a clean slow burn that smolders with a delicious sweetness and absolutely makes you cheer when they FINALLY kiss!

How do you feel about the stolen bride/reluctant marriage trope? What other books handle it well? Let me know in the comments!