Story Snippet: The Last Will and Testament of Captain Nemo (Mary)

Here in the height of summer, most people find their thoughts (if not their actual bodies) drifting to the pool or the beach. For my part, I just got back from a much-needed trip to the river and it was SO refreshing.

Which got me to thinking about water, and I decided that for this episode of Story Snippets I would share an excerpt from my nautical fantasy novelette, The Last Will and Testament of Captain Nemo - a mashup of 20,000 Leagues Under the Sea and Hans Christian Andersen's The Little Mermaid. 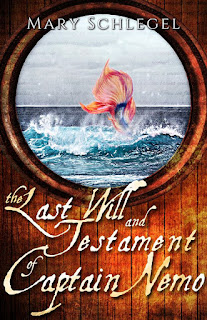 Close by the Rackliffe estate was a stretch of beach where, Eyrál knew, the younger Lord Rackliffe was wont to go riding in the early mornings. It was to this place that she travelled, and waited until just before dawn to swallow the witch’s draught.

How the transformation took place, she never knew. Upon swallowing the draught she found her vision distorted, her ears pierced by a deafening ringing, and her senses scattered by an overwhelming dizziness. In this condition she lay on the sand, unknowing, until Lord Rackliffe did indeed happen upon her.

He saw her lying senseless, still half in the water, and drew the natural conclusion that she was the victim of a shipwreck, as he himself had so recently been. Upon discovering that she still lived, but being unable to rouse her, he lifted her in his arms and began carrying her back to his father’s house, utterly unaware that in his arms he bore the woman to whom he owed his life.

Into this situation, Eyrál awoke: borne in the arms of the man whom she had spent the last months loving from afar. And in that moment, her love for him grew deeper still, and she leaned her head on his shoulder and rested in her love and his nearness.

Lord Rackliffe, for his part, took Eyrál back to his father’s house and saw that she received the ministrations appropriate to the circumstance of a shipwrecked woman. His efforts to ascertain her name, as well as every other line of questioning or conversation, were met only with silence, for the Mer speak a language unique to them. Eyrál understood not a word that was spoken by Lord Rackliffe or any of his household, and dared not speak a word in her own tongue for fear of betraying her identity. Instead, she maintained an unbroken silence until those around her reached the consensus that she was a mute.

As she had in the way of worldly possessions only the sharkskin garment she had been wearing when she swallowed the witch’s draught, a wardrobe was provided for her. As she had never before possessed human legs or feet, she found walking both painful and difficult. This was easily explained in the minds of her hosts, who believed she simply needed time to convalesce. She mastered her newfound limbs quickly, however, and within a few days was walking well, though her feet remained tender and delicate.

Over the span of her convalescence, Lord Rackliffe grew fond of her as one would of a foundling dog, and treated her as one, but so hopelessly in love was she that she suffered all without complaint—even with gratitude! When he had her dressed as a pageboy so that no one would question her accompanying him on hunting trips, she complied with a naïve sweetness that only made his behavior more repulsive by comparison. When he placed a cushion on the floor outside the door to his private rooms for her to sleep on at night—as if she, a princess of the Mer and the savior of his very life, were truly nothing more than a favored dog!—she accepted all with gladness.

Her sweetness of temper and beauty of spirit made her a favorite among everyone in the Rackliffes’ household, from the Lord and Lady to the lowliest servant. However, if she believed that her perfect devotion and saintly submission to Lord Rackliffe’s unforgivable cruelty would win his love, she was sadly mistaken. While she slept on her cushion outside his door and accompanied him on his hunts and attended his lavish shipboard parties, his affections were being lost to another: the temple maiden who had discovered him on the beach where Eyrál had dragged him after the sinking of his ship.

A few months after Eyrál’s arrival, an announcement was made of the younger Lord Rackliffe’s engagement to that same temple girl, the daughter of a wealthy and influential Egyptian businessman. Arrangements for the wedding were made, a grand celebration aboard Lord Rackliffe’s finest ship was planned, and of course, Eyrál was invited.

The Mer princess knew full well that Lord Rackliffe’s impending marriage would mean her death, thanks to the sea-witch’s spell, and her heart broke at the realization that the man for whom she had sacrificed everything—for whom she was about to give her life!—shared nothing of her devotion. And yet so great was her love of him, and so good was her heart, even in the face of losing both love and life, that she held up her head, smiled upon Lord Rackliffe and his new bride, embraced them both to show her goodwill, and danced with more joy and abandon than any of the other guests at the celebration.

The wedding night came. The guests, weary from their revelry, retired to their cabins. Lord Rackliffe and his bride withdrew to the tent that had been erected for them in the middle of the ship. Only the night watchman and Eyrál still stirred.

As she stood at the bow of the ship, a cry came to her from the sea. Her sisters, distressed by her rash and vain pursuit of the prince, had themselves gone to the sea-witch to seek a counter-spell, one that would allow their sister to return to her life among the Mer. The witch had granted their boon in the form of a knife. If Eyrál were to use this knife to slay the prince before the approaching sunrise brought her death, her Mer form would return to her and she would be free to rejoin her sisters.

Pained by their mournful entreaties, Eyrál accepted the knife her sisters offered and stole into the tent where Lord Rackliffe and his bride blissfully slept in each other’s arms. But so great was her love, so good was her heart, that even in the face of her own destruction she could not take his life.

She returned to the bow of the ship and looked down to where her sisters eagerly waited. But to their dismay, she cast the knife from her and withdrew to the center of the ship, away from their sight so that she might not inflict upon them the pain of witnessing her end.

The sky colored, the sun rose, and yet Eyrál did not die as she had anticipated. No, indeed, for the witch’s spell had not required the love of Lord Rackliffe himself; it had only required the love of a human—and there was a human on board that ship who loved her with body, heart, and soul: myself.

I hope you enjoyed this excerpt! If you'd like to read the rest of the story, you can find it here.