Weekend Reads: The Faceless Mage and The Unseen Heir by Kenley Davidson (Rachel) 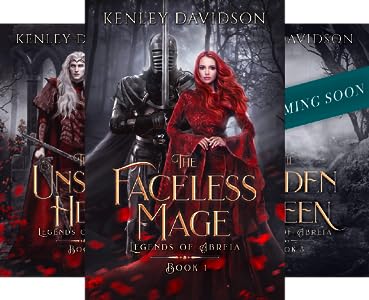 Leisa, a bodyguard of the king of Soren’s daughter, serves out of gratitude and love. Abandoned by her parents when a child, she was taken in by the king and believes he considers her more than just another servant. However, she questions this assumption when he insists she impersonate his daughter on a political trip by using her magical gift. His demand puzzles her because she believes the move foolish and herself very unqualified to mimic the princess. However, motivated by her love of the princess and her adopted homeland, Leisa reluctantly agrees.

Once arriving in the foreign land, she is thrown into a difficult situation that grows worse by the day. Leisa encounters the Raven, a masked and silent assassin bound by magic and shrouded in mystery. Everyone except the king fears him. The Raven is the king’s blunt force, killing suddenly and swiftly. The king orders him to guard Leisa in her position as visiting princess. Whether the order is meant as a threat or a comfort remains to be seen. However, almost immediately, Leisa begins to wonder who is behind the mask and why he acts the way he does.

Set in a world of magic, mages, and political maneuvering, Davidson does a beautiful job pulling us into the world and introducing the characters. I appreciated the depth of the character development, especially of the two main characters. The organic and believable development of their connection despite communication issues, cultural differences, conflicting desires and goals is entrancing. As a host of forces work to keep them apart for various reasons, the two work together in an unsteady partnership to survive.

My absolutely favorite part of the set of books is the way Davidson connects the plot, tensions, and conflicts to the characters themselves consistently through both The Faceless Mage and The Unseen Heir. Yes, the situations bring external pressure to bear on the characters. Still, each character's decision is tied tightly to who they are, their character, and their integrity. Moral dilemmas are weighed and wrestled with before decisions are made. The easy way isn’t always the best. The healing power of love is realistically challenging to accept and process. It isn’t an instant cure-all. The characters still have scars, memories, and a past they will continue to wrestle for a while.

All that said, do you like a mysterious, powerful hero who needs someone to see him for what he is? How about a man not afraid of accepting the help of a woman and fights at her side? Don’t forget a heroine who isn’t afraid to make hard choices and fight for what is right and those she loves, even at significant personal cost. Oh, and best of all, this book includes a solid adventure melded with a wonderful romance. If all of these are true of you, I recommend The Faceless Mage and The Unseen Heir. The books are the beginning of a longer series, but together they form a complete romantic story. I am looking forward to the next book in the series, The Hidden Queen.

What books have you read recently with solid and engaging characters?

What aspects of a character draw you to a book?

Posted by Rachel Rossano at 3:00 AM