I'm so excited to bring the Clean Fiction Blog Tour to Lands Uncharted today! For all of March, Story Quest Academy is celebrating clean indie fiction for middle grade and young adult readers with a variety of book reviews, interviews, and other posts from authors and readers. Some of my favorite authors have already been featured, including Liz Delton, J.M. Hackman, and Mollie E. Reeder! I also had the opportunity to share a fun interview over at 5WildeFlowers a few weeks ago :) You can find the full schedule of posts, plus information on an amazing GIVEAWAY, below. 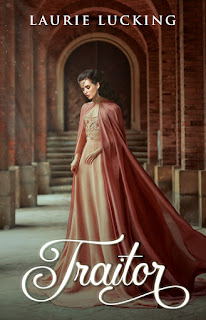 Today, I get to share the *first ever* sneak peek into my upcoming young adult fantasy, Traitor! Eeeek! Traitor is Book Two in my Tales of the Mystics series (though it can be read as a stand-alone) and follows Princess Penelope, who was embroiled in a traitorous plot against her fiancé and his kingdom of Imperia in Book One. The plot was foiled, and Penelope has now returned home in disgrace with both her confidence and her kingdom's relations with Imperia in shambles. This is the very first scene of Traitor, in which Penelope's life takes a new direction (as hinted at in the Epilogue of Common 😊). Enjoy!

“Exiled to Delunia?” I gripped the edge of my chair before I could topple out of it.
When Papa asked me to join him in his study, the nervous twitch of his brow hinted something was wrong. But I’d expected a scolding about the cost of my latest gown or a request to admonish my sister Sophia about her flirtatious behavior or loose tongue.

Papa adjusted his collar. “Not exiled, Penelope. It is a betrothal. A joyous occasion.”

Oh, yes. My last engagement had been such bliss.

“The emperor and his son are thrilled to be making the alliance.” He adopted his best diplomatic smile, spreading his hands across the polished surface of his desk.

I swallowed a scoff. Of course they were. The benefit would be entirely on their side. How could Papa even consider it? Delunia was miserably hot, the people were loud and unrefined, and they didn’t speak any form of Sandrinian.

And it was thousands of miles across the sea from my beloved Trellich. From the entire continent of Sandrin.

The nightmare my life had become over the past year was about to get even worse.

“Won’t the voyage take weeks? Will I ever see you again?”

“Only one week, if the weather is favorable.” A ripple pricked through Papa’s confidence. “But it is a long journey, I can’t deny it. We won’t be able to visit often, but I’m sure every few years or so…”

Every few years. I’d almost prefer to separate from them forever than to become a stranger to my own family. “But why? How could anything they’re offering in an alliance be worth sending me so far away?”

He hesitated for a beat. Two. “They trade many valuable materials, and it would certainly be in our best interest to support and encourage those relations.”

“We have valuable items to trade as well,” I argued. “They can’t match our textiles, nor our gemstones. Isn’t that reason enough for the Delunian royal family to foster our trade agreements?”

“Their navy is formidable, the best on the Toan Sea. It wouldn’t hurt to have such might on our side, especially”—he glanced away, avoiding my gaze—“since our relations with Imperia have become more strained than ever.”

“Imperia?” I gritted my teeth. The very name made me want to shudder. “They wouldn’t cause trouble now, not with the new trade agreement in place.”

A knot on the dark wood of Papa’s desk consumed his full interest.

I swallowed a huff of frustration. “Surely, they wouldn’t defy an agreement they so recently—”

“They didn’t sign the agreement, Penelope.” Papa’s gaze collided with mine, roiling with frustration and concern.

“I received their response last week.” He massaged his forehead. “They do not wish to enter into negotiations with us at this time.”

My stomach sank so quickly, I expected to hear a thud on the floor. They refused to sign because of me. Our improved alliance was supposed to be sealed by my marriage to Raphael, the Imperian Crown Prince. Instead, I’d gotten mixed up in a treasonous—murderous—plot.

“You’re ashamed of me. That’s why you’re sending me away.” I curled my fingers into the smooth material of my skirt.

“Of course not, dearest.” He leaned back against the curved wood forming the back of his chair. “I, too, misplaced my trust in the Duke of Brantley. He managed to fool us all.” He straightened. “But people will talk, and this marriage might give you a chance for a fresh start.”

A fresh start. Was such a thing possible? Another fiancé. A new country to explore. More opportunities to squander, relationships to destroy.

I gnawed at my lip. No, I mustn’t think like that.

The Duke of Brantley fooled even his dear friends, his own king and queen. I’d never step foot beyond Glonsel Palace again if my every thought anticipated future mistakes.

“Do you know anything of the Delunian prince?” I channeled stern tension into my legs, drawing on every last reserve from my etiquette training to sit still rather than fidget.

Papa smiled, apparently pleased by my feigned interest. “I met him when he was just a boy. A stout little fellow, clearly gentle-hearted and eager to learn. His father has spoken highly of him in his letters. Says he’ll make a fine husband, and one day, emperor.”

As though a father’s word could be trusted on such a subject. Especially when he sought to convince us to agree to the marriage.

But Papa looks so hopeful… “That is—comforting, I suppose. How old is he?” I pressed my lips together to prevent them forming a grimace. Please, Luminate, don’t let him be ancient.

“Only a few years your senior. Nineteen, I believe.”

That, at least, was a relief. “Then I am to be an empress.” The word tasted foreign—equal parts intriguing and distasteful—on my tongue.

“Indeed. And what a lovely one you’ll be.” Papa stood, rounded his desk, and placed a warm hand on my shoulder. “You shall be missed, child, more than I can say. But I do think it’s for the best. You’ve an entire lunar cycle to prepare for your departure, so take some time to get adjusted to the idea.”

An entire lunar cycle. He spoke the words as though they described a vast length of time, not the span of four weeks.

I rose, tucking my hands behind my back to hide their trembling. “I have much to think on and prepare. I’d best—”

I hardly registered his reply before he clenched me tightly to his chest. Burying my face in his velvet doublet, I shut my eyes against welling tears. I’d be with my family for a lunar cycle yet, and they’d visit every once in a while. We could always write letters that would take weeks to travel across the Toan Sea…

A whimper escaped, and Papa clutched me tighter. Please, don’t make me go.
I can't wait to share the rest of the story with you!! Traitor will be published on April 27th and is now available for pre-order! If you're interested, you can find all the pre-order links HERE. And as a huge thank you for your interest in my book, I'm offering some pre-order goodies! Fill out THIS FORM, and I'll send you:
*Art prints, bookmarks, and signed bookplates can be mailed to U.S. addresses only. (Sorry, international shipping is rough!). But the bonus scene from Common will be e-mailed as a PDF and is available internationally!* 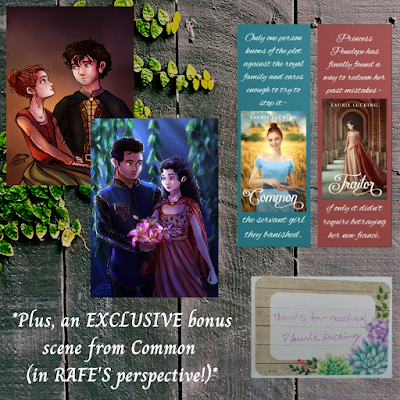 Thanks for reading! I hope you enjoyed this sneak peek at Traitor, let me know what you think in the comments!
As promised, I've included the entire schedule below! And remember that mention of a giveaway? To enter, just comment on and share posts in the Clean Fiction Blog Tour! (When sharing posts, make sure to tag @StoryQuesters so they can count your entry.) The prize pack includes a scholarship to Story Quest Academy, plus e-books and swag from many of the participating authors! You can find the full details HERE--good luck and happy reading!
March 1st Story Quest Academy