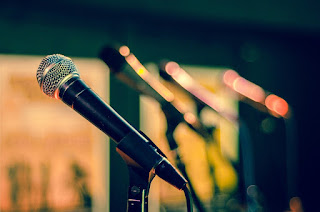 Voice:  the expression of your character’s perspective through words.  When writing a story, your goal is to form a solid voice that speaks to your reader and gives them a grasp of who the characters are and who the narrator is.  But when you’re writing with multiple Points of View (POV) or even from a single perspective, you can run into problems with your prose and dialogue coming across as bland, distant, or even blending together without enough distinction to let the reader know who is who.

But voice isn’t an unattainable goal and, with some brainstorming, there are many ways you can make each character unique and distinctive both through the prose and dialogue.  Here are some practices that can help you create a unique voice for each character:

Determine Personality:  One of the first things to do is to determine your characters’ distinct personalities.  You can do this through things like fleshing out their backstory, figuring out what they love and hate, and expanding on their family connections.  But, if you’re looking for something a little more concrete, two tools I recommend are the Meyers-Briggs Test (16 Personalities) and the Enneagram.  For the Meyers-Briggs test, there are several free tests available online.  I recommend taking the test as if you are the character you’re planning to write.  And, the results at the end of the test can help you with crafting a consistent personality type.  For the Enneagram, I recommend using it for determining core motivation:  the default first knee-jerk reaction a character would have to any circumstance.  But with both of these tests, remember, these are only guidelines for your characters.  Because no person strictly abides by the patterns and standards presented in the results.  Another thing to note:  ideologies and opinions can change, but personality traits typically do not.  For instance, an introvert can learn to cope with and even enjoy extroverted activities over time but, at their core, they will still prefer introvert activities as their default.  Keep your character’s personality consistent so their journey will be believable.

Select Exclusive Vocabulary:  With multiple POV’s, create a list of key words and phrases for each character’s internal prose and external dialogue, and keep that list exclusive to that specific character.  Also, focus on sentence style and structure too.  One character might think in shorter, simpler sentences, while another might use more complex and overly descriptive thoughts.  Another thing with vocab is to focus on expectations and connotations.  For instance, if you have a hardened or edgy character, they might never use a term like “cute” or “adorable,” or if you have an overly sweet character, they might tend to avoid harsh language in their prose and dialogue.  Also pay attention to the specific details that each character notices from their POV, whether in the setting or about other characters.

Write a Rant:  Find something your character is passionate about, whether they love or hate it, and get them rambling.  A rant written from a character’s perspective can give you a good word pool as well as a variety of sentences that you can pull from the rant to place in your story.  The stronger the opinion, the more the character stands out.

Character Voice Practice:  One final practice I like recommending is the “Character Voice” practice.  Take a setting (or even a picture), and then describe it from the perspective of two different characters.  This is a great way to focus on specific language and to learn how to bring in more of the protagonist’s personality into the Point of View.  This way, you can give your descriptions more of a sense that they were written directly from the perspective of the protagonist instead of from the author.  For example, imagine describing an image or setting from both the perspectives of an optimist and a pessimist.  In this case, we’ll use a rainy setting.  An optimistic protagonist might see the raindrops as a symphony of rhythm, casting brilliant sparkly droplets everywhere in a delightful dance.  But the pessimist might see it as a gloomy reminder of how cold and cruel the world is, watching as rain strikes the pavement without reason, seeing its existence as meaningless from beginning to end.  Have fun with your wording and language as you do this practice, because that will give your writing the strongest voice.

There are more examples of fleshing out voice that I could give, but in the end, your goal is distinctiveness.  The more you can distinguish characters from one another, the stronger their voices will become.  And that will make them memorable.

What are some methods you like using to flesh out a character’s voice?