I don’t like the idea of crummy first drafts. I like my work in decent shape at the end of the first draft. Consequently, writing the first draft intimidates me and takes a long time (a lot of wasted time while I stare at the screen too). I’m in the process of writing book 2 in a series and have lots of other books pressing on me, so I’m trying to write fast and be more dedicated to actually writing every day (not just editing and staring at the screen, my stalling techniques). Aside from the discipline of writing six days a week, one thing that has really helped me get past my fear and the stress of the writing not being good enough is to give myself permission to write in layers.

What I mean is that I am basically going through a crummy rough draft phase followed by multiple revisions—but for scenes or chapters instead of the whole book. This prevents me from feeling like I need to redo an entire book; it also lets me develop the characters and plot more slowly, more thoughtfully, and hopefully, better, than rushing through the entire draft would.

Trying to get a near-perfect first draft puts way too much pressure on me as I sit down to right—because this involves not only getting the action right but also the character and setting descriptions, the character motivation and goals, the dialogue, the beats and transitions, and the writing itself. All at once. That’s a lot to do! It’s little wonder I freeze up when I try to do that. 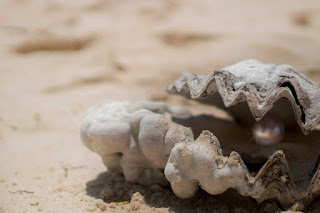 But when I give myself permission to focus on just spitting out the action, with minimal descriptions, skipping dialogue, action beats, or whatever else doesn’t come easily, I get out the bones of a scene I can then go back to and fill in. Or if the dialogue is flowing but I am not sure of the setting details or the beats, I can just write the dialogue and later give thought to the other—let myself picture the scene while doing the dishes and then go back and add that in. I can get out the bones of a scene or chapter one day, then add in another layer the next day, making sure, less-stressful progress.
Here's more on what writing in layers looks like.

**As a note, I am a connect-the-dots writer. I have a general outline in mind, know a bit about the characters, and have certain scenes already fleshed out in my mind that I just need to connect. I learn more about the characters and plot as I write and adjust accordingly.**


1) Visual the scene—who, where, what happens, why

2a) Write down the basics of whatever element is strongest—set a timer and just write, even if it feels more like taking notes than writing a cohesive scene. Taking notes is fine! It’s your foundational layer. It can be just the general action of the scene, the dialogue, or the setting. Or a mix of the three. Just getting the bones on paper counts as your daily writing.

2b) Write notes for any scene that you find playing in your head. It doesn’t have to be the next scene in the book. Any scene counts toward your daily writing goal. I write in Scrivener, so I can easily set up chapters and scenes and just add the notes to whatever document I need to, even if it’s five chapters ahead of where I am in my consecutive writing. It gives me something to work toward—a dot to connect to. I also know I’ll have an easier day when I get to that scene, since part of the work is already done. So writing in layers also allows non-consecutive writing.

3) Consider the scene itself and decide what comes next. Once you have the bones, consider the scene in light of the characters and the rest of the novel. What’s the next logical thing for the characters to do? Jot it down to help you get started for the next scene, for when it’s time to move on. Ask how can I make this scene fun or unexpected? (What would make you excited to write the scene—the humor, the surprise you’re building in, the change in the character relationship?) What challenge to the goal can I throw in, if I don’t already have one? Also, did I learn anything unexpected about the character or something important to the plot?

Start thinking about the next layer to add—dialogue, setting details, etc.—as you walk, do dishes, and so on. Giving your mind time to process things—especially allowing it to sleep on a question—helps. One of my college professors recommended doing most of your studying two to three days ahead of a test, then only reviewing the night before (and getting a good night’s rest), because the mind needs time to process the information. The “sleep on it” advice for making decision also comes into play since every word is a decision
4) Fill in another layer. The next day, go back and add another layer to the scene. Take your “scene considerations” into consideration and fill in at least one aspect—say, setting details. Or maybe refine character thoughts and motivation based on what you learned while writing the scene. You don’t have to fix everything, but add in at least one layer, and then consider your goal met.

5) The next day, add another layer. Fill in missing beats, transitions, descriptions, and brush up the writing a bit, if you want.

6) Move on to your next scene. Don’t spend too long on any one scene. Three days ought to be enough, and resist the urge to make the writing perfect. That should be a separate pass altogether since you will likely discover something later on that require you to change details in the earlier scenes. Editing is also a different mindset from the creative one, so try to stay in the creative mindset for the first draft. A little polishing is okay, but not too much. Polishing and “re-reading to get into the mood” are classic stalling techniques. A little is okay but recognize when you’re doing them for the wrong reasons. If you’re stalling, have a hard talk with yourself and then go write. Writing notes isn’t that hard. You can revise tomorrow! Add in another layer tomorrow!

7) Complete and double-check. When your novel is complete, go back and make sure the overall structure and character arcs are correct (they should be since you’ve been thinking about throughout the process). Go back and fill in any details you may have left for later and do a general polish of it. Let it rest for a few weeks or more, then start the revision process with fresh eyes.


I write fantasy and steampunk with lots of characters and magic and world building rules to consider. Writing in layers helps me figure it all out over time, scene by scene or chapter by chapter, giving me a presentable first draft, rather than forcing me to speed through a crummy first draft I might have to redo large sections of because I messed up character motivation or something else. If you’ve been having trouble making progress because of the pressure of writing a good first draft, I hope this methods helps you. Do you have a favorite method of writing?
Posted by Lizzie at 4:00 AM