About a month ago, we posted a cover reveal for a new Beauty and the Beast retelling by Selina R. Gonzalez called A Thieving Curse. Today, I'm excited to share my review! It's been a gloomy, rainy few weeks here in Minnesota, plus we've had loved ones with health challenges and a few days of feeling yuck following our Covid vaccines. So I've been in serious need of a fun, captivating escape kind of story, and A Thieving Curse provided just that! As evidenced by the fact that I stayed up way past my bedtime several nights in a row to keep reading... :) 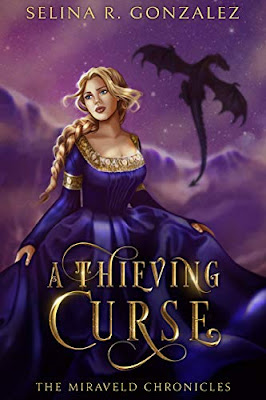 Princess Raelyn loves nothing more than getting into mischief with her brother Gareth, but she's been training for years to fulfill an arranged marriage with the heir to a neighboring kingdom. When the time arrives to journey to her new home, the royal traveling party is attacked, causing Raelyn to get separated and hopelessly lost. When a strange dragon-man flies her to safety, she's not sure whether she's being rescued or kidnapped, especially when he refuses to return the princess to her family after learning her identity.

Despite a tumultuous start, Raelyn eventually comes to realize the dragon-man - Alexander - is actually a kind, charming prince suffering the effects of a curse. But getting wrapped up in his plight puts Raelyn an impossible predicament. If she returns and fulfills her betrothal, she'll place herself in the clutches of a cruel, power-hungry king and possibly expose Alexander, threatening his life. But if she stays with Alexander and his band of affectionate, loyal servants, Raelyn's family will think she's dead and her kingdom will face the danger of a broken treaty...not to mention, she might be forced to admit she's developing feelings for a man with a tail, wings, horns, and glowing red eyes.

As you can probably tell, I enjoyed this book SO MUCH!! A Thieving Curse is just the kind of retelling I adore, where the elements from the original Beauty and the Beast fairy tale were so creatively incorporated that the story felt new and fresh with unpredictable twists and turns. Princess Raelyn made me frustrated at times, but she had a lot of spunk and courageously handled the many challenges thrown her way. The cast of secondary characters were quirky and memorable - Alexander's friends were such an endearing bunch I totally wanted to go hang out in the mountains with them! And then there was Alexander himself. *happy sigh* I fell so in love with this flirtatious, caring prince who wore his heart on his sleeve and tried to be noble and forgiving despite all that he'd been through.

Gonzalez's writing style was fun and engaging, and I especially appreciated her penchant for witty dialogue :) The fantasy world was light and imaginative, with a bit of magic and plenty of wild creatures roaming the mountains. But my favorite aspect was the characters - their complexity and relatability and the way their relationships were portrayed, including friendships and family in addition to the central romance.

I'd highly recommend A Thieving Curse for fans of romantic fairy tale retellings, and I can't wait to see what's coming next in The Miraveld Chronicles!

Have you read any great fairy tale retellings lately? What elements do you always want to see in a Beauty and the Beast retelling?