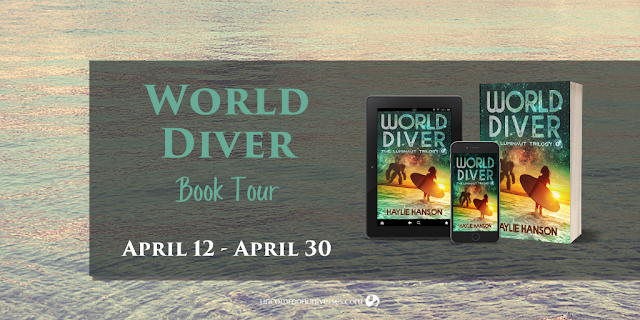 We have a special treat for you today! I'm so excited to welcome Haylie Hanson to Lands Uncharted today as part of the World Diver Book Tour! World Diver is a young adult science fantasy releasing on April 20th! I can't wait!! I'll share more about the book and author below, but first Haylie took the time to tell us about the themes in her story. Enjoy!


If you knew your destiny was something greater than yourself, something bigger and scarier than you could possibly imagine, that might involve the ultimate sacrifice with no guarantees your side will come out on top… would you do it anyway?

Would you be the hero of your own story if it mean you had to leave everything you’d ever known forever?

Humans are conditioned to want safety and security, and Callie James, the main character of World Diver, is no exception. As much as I can say I’m a travel-loving, bucket-list-making, extroverted people-person, I like safety, too. I’m not comfortable with the unknown. I’d like to think that if I were confronted with a destiny filled with sentient robots, superpowers, and interdimensional gateways through the multiverse, I’d be totally stoked—ready and willing to take a leap of faith into a brand new adventure. But in reality, I’d be just as terrified as Callie, and probably even more reluctant than she is to believe I’m anything worthy or important.

One of the themes I wanted to explore when writing World Diver was the idea of being stuck in our fears, and what we’d be willing to sacrifice after learning our true purpose. Callie is pretty happy being stuck—she knows she’s not meant to be a slacker forever, but she has no idea what she might be meant to do besides surf with her best friend and avoid the “college talk” with her overbearing dad. Her natural reaction is to stick her head in the sand and hide rather than confront what makes her afraid. When destiny calls, Callie doesn’t immediately leap into action. She hides, and tries to get rid of the problem by throwing away an opportunity because it comes with a potential cost, choosing comfort and complacency over facing her fears.

Granted, murder-phantoms from another realm haunting your bedroom and stalking you across town are enough to make anybody pretty fearful. Who wants to actually face that, right?

And yet, no matter how much Callie tries to hide, she comes to learn (in a really big, superpowers-and-multiverse-piloting way) that fear and avoidance in the face of truth are never the solution. They just make our problems worse. When she’s finally asked to make the choice to do the right thing or hide forever—to choose the life she wants for herself—Callie stands up to her fear and chooses to be brave, even though she desperately doesn’t want to. After all, she might fail: her biggest fear of all. But even still, she takes the leap.

And in the end, it costs her. Boy, does it cost her big. But if she had to do it all over again… there’s no question she’d choose the same path. Every. Single. Time.

I hope in Callie readers can find a kindred spirit. She might start out as a girl who feels like a disappointment and a failure because she’s too afraid to take a risk, a walking self-fulfilling prophesy. But she learns that what makes her unique is nothing to be afraid of. To embrace her gifts—her quirkiness, her wit, and her great big heart, even if it might break. To look destiny in the eye and say “bring it on.” To dive into adventure, with no guarantee of what’s waiting on the other side of tomorrow.

To always seek the Light, even in the Darkest places.
Eeeep, this sounds SO GOOD! Want to know more? Here's the back cover blurb:

College, grades, extracurriculars--who cares? Sixteen-year-old slacker Callie James would rather make robot creations and surf waves with her best friend Will. Then she discovers a mysterious glowing rod under the ocean surface, and her entire world turns upside down.

One, her hands start glowing (weird). Two, she can now control people (awkward). Three, she accidentally brings her robotics project to life. Classes were hard enough without her robot Nemo literally eating her homework.

Only the reclusive Dr. Ormandi knows the truth: Callie is a Luminaut (aka a light wizard) and it’s her destiny to reunite the shattered multiverse by collecting all the Light Cores (aka the glowstick of doom) in all the other worlds. To do this, she must repair the World Diver, the fifty-foot tall robot lurking in Dr. Ormandi’s basement hangar.

As Callie learns about her Luminaut powers, Nate crash lands into her life. He’s hot. Funny. Crazy about her. One problem: he’s technically dead. Oh, and he insists uniting the multiverse will destroy everything.

Pursued by murderous interdimensional phantoms and plagued by insecurities, Callie must protect her family and friends, while figuring out who to trust.

And all before a deadly, looming evil snuffs out her Light for good. 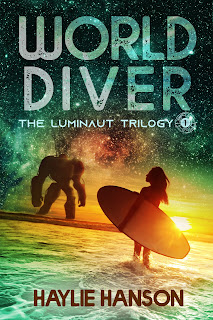 You can pre-order World Diver on Amazon or other e-book retailers, or get an autographed paperback or autographed hardback! And here's more about the author:

Haylie Hanson writes YA fantasy and science fiction about quirky kids with superpowers finding the courage to embrace their destiny. She has an unhealthy obsession with Star Wars, Stranger Things, and Marvel. Haylie used to teach elementary special education before changing careers, and now crafts brand new worlds in between making snacks for her two tiny spawn. She loves to read any kind of YA fantasy, especially books with characters whose voice can reach out and grab her from page one. When Haylie isn’t writing, she can be found drinking very strong coffee, trying not to kill plants, and dreaming of saltwater hair and summertime beaches. 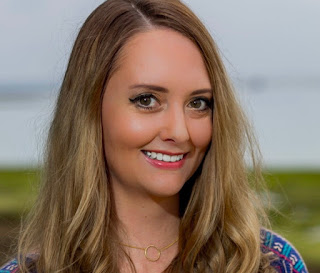 You can connect with Haylie on Instagram, Facebook, and her website. Thank you so much for joining us today, and congratulations on your upcoming new release!!
Posted by Laurie Lucking at 10:00 AM