Reclaiming Ryda, the next novel in the Once Upon a Duchy series is debuting on April 20th. I can't wait to share it with readers. Until then, I am going to offer a bit of a sneak peek into the second chapter of this Rapunzel-inspired novel. 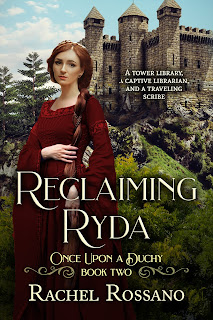 Background: The hero and heroine met briefly the day before when the hero arrived at the castle where Ryda is kept as a captive librarian in one of the towers. It is now the next morning and Ryda is rising from her bed on the top floor of the tower.

The distant thump of books being dropped on a hard surface brought the time to my attention. My visitor was most likely back. By the look of the sun, I had been moping around far longer than I ought.

Rising, I donned additional layers of clothing, straightened my bedding, and closed the windows. Finally, I brushed and braided my hair. I gave a fleeting thought to leaving it loose, it being my one aspect that I might use as a wile, but then I thought better of it. I refused to stoop to Rodney’s level. I braided it like normal, without any extra measures. In the end, it was neat, and that was enough.

On my way down to the first floor, I paused on the second to gather my customary morning occupation, a stack of Saruthian fables that I was translating. When I reached the bottom of the stairs with my arms full of books, I was surprised to meet the stranger entering the library.

“Did you forget something?” I asked, nodding toward where his satchel rested in the middle of the table.

“No, I needed to check the corridor. As you can see, I have plenty of ledgers to go yet.” He laid a large hand on the stack of ledgers resting on the far end of the table. They were probably the source of the sound that had announced his presence.

“I also have much to occupy me.” I crossed to the end of the table farthest from the door and from the stranger. Setting down my own small stack of books and note-taking pages, I left again in search of my ink and pens, which I kept tucked next to the stairs halfway between the first and second floors.

By the time I returned, the stranger had made himself comfortable nearest the door, covering half the table with the stacks of ledgers and the contents of his satchel. His shaggy golden-brown head was already bent over an open ledger when I settled in my place opposite him. I scooted down as far as I could possibly be and still share the table.

We settled into a comfortable silence, and within moments, I forgot the man was even there. About midmorning, I struck a Saruthian word I had never encountered before. I tried figuring out the meaning from the context, but I couldn’t guess. Rising, I trekked up to the second floor for the rudimentary dictionary that I had left behind.

“Where do you want it?” The question in the familiar disgruntled tone of voice drifted up from below as I reached the landing. My heart stuttered. The breakfast tray had arrived. The texts on the table were delicate and couldn’t withstand the delivery boy’s customary shoving act. I turned to rush back down the stairs and rescue my books.

The deep tones of command in the stranger’s voice from below stayed my feet. Would he spare my treasures? Taking a risk, I waited. He spoke again.

“I said, not there!” The scraping of wooden chair legs on stone followed by shuffling and thumping left me guessing. “Leave them here.”

“The lady never makes this much fuss.” The usual delivery boy’s nasal whine made me cringe even from the top of the stair.

“She shouldn’t have to. These are delicate and valuable documents. Treat them with care, or you will be held liable for their value.”

The boy snorted. “It won’t be me. That girl’s hide will receive the measure.”

“All the more reason to take care.”

Another snort was followed by a clatter as the tray was set roughly down.

After a few moments of heavy silence, the lad retreated with a sullen leadenness to his steps.

I quickly retrieved my resource before descending with far more languor than I felt. To my great relief, I found my end of the table just as I had left it. The stranger and his gear had moved to the floor next to the resources I had initially pointed out to him. On his end of the table, two trays covered the entire space. One held only empty dishes. The other lay neatly arranged. A small bowl of berries and a glass of milk stood next to my customary porridge. I stared at the luxuries.

I turned to protest to the stranger that surely the milk and berries had been meant for him, but he was gone.

My only recourse was to eat, which I did. However, I couldn’t bring myself to finish all the berries. They were perfectly ripe, sweet and tangy on the tongue. I set aside half for him when he returned and set the empty trays on the ledge for the boy.

An hour later, the stranger returned. Slipping silently through the gate, he crossed to his collection of things and hunkered down on the floor. Propping his back against the edge of the bookshelves, he opened the top ledger on the nearest pile. He resumed his perusal of it as though nothing had happened.

I studied him brazenly for a moment, half fearing and half hoping he would ask why I stared. In the end, he didn’t, and I returned to my work.

The meter didn’t work. I could get the words to rhyme, but the timing remained clunky. Despite it only being a child’s rhyme, I desperately wished to get it right. The only solution was to try it to music.

After another swift trip up the stairs, this time to the third floor for my lute, I returned. Settling with the translation and the original before me, I began plucking out a simple melody, an ancient one I had once heard played by a traveling minstrel. After a few tries, I had fit verse and tune together.

At the end of the first translated stanza, the stranger stood.

I stopped singing and playing. A hot blush flooded my face as I realized I had forgotten the man was still there.

“Please continue.” He came around the table to stand behind my right shoulder, leaning over to read my notes. A waft of mint and honey filled my nose.

He hummed a few bars of the song I had been playing. “It is a pretty tune. Where did it come from?”

“I heard it once.” I found my throat suddenly dry.

“I like your choice of word here.” He reached around me to tap the word gilt in my notes. “I would have chosen gold, but your choice fits the rhyme pattern better.”

“It also seemed to better fit the intent of the song.”

“To lull children to sleep?”

“To accompany their play. At least that is what I always suspected these songs were meant for.”

I turned my head to look up at him and found myself looking deep into the warmest pair of brown eyes I had ever encountered. Not that I had gazed into any man’s eyes for any length of time before that moment. I immediately dropped my attention to my instrument.

“So, this is where you ran off to?” A young man of perhaps eleven years strode into the room and surveyed the scene, including the chaos on the floor where the stranger had been working. “And you say I make a mess.”

“Pip, hush.” The stranger straightened and frowned at the new arrival. “I thought I told you to mind the horse and lie low.”

“There will be no minding of no horse, master, if you don’t go speaking to the man in charge of the stables. He had me evicted and refused to feed your horse.”

“Did he tend to the horse’s lameness, at least?”

“Is that how I taught you to behave? Introduce yourself.” The censure in the stranger’s voice was met with a smirk from the lad.

The lad executed an excellent bow fit for a meeting with a duke. “Begging your pardon, my lady. My name is Pip Mayton, late of Greenwood and more recent of this gentleman’s service.”

I rose and offered him a deep curtsey in return. Grandness begets grandness. With a broad smile, I introduced myself as Rydaria Lowellyn of Westerworn Tower. “My friends, few though they are, call me Ryda. I would be pleased to count you among them, Master Mayton.”

“Nay, my lady. I will be happy to be called a friend, but Pip is best. Master Mayton is far too formal for the likes of me.”

I turned to the stranger. “I believe you need to apologize to Pip, sir.”

The stranger’s handsome features were an amusing study in confusion. “For what?”

“You chastised him for not introducing himself, and you have shared several hours of my company without doing the same yourself.”

The stranger laughed. It was an inviting sound that brightened his eyes and filled the room with warmth. “True enough. My apologies, Lady Lowellyn, I am in the wrong.” He stepped back to offer me a bow. “I am Crispin Winder, a traveling scholar from Areyuthia.”

“Areyuthia is a long way off.” Three months’ journey by foot was distant for anyone. According to my best maps, Areyuthia claimed the far northwestern corner of the duchies, far from Worthenave and its capital city.

“I have been journeying long,” he admitted with a hint of sadness in his voice.

Pip cleared his throat loudly. “A certain horse is starving.”

“Yes. My apologies, my lady. I will return to clear up my mess.” Master Winder offered a truncated bow in my direction before leaving on the heels of his companion.

Pip’s voice echoing back to me as they raced off to see to the horse’s condition only underlined my loneliness. Even the wandering scholar had a companion.

Having lost my interest in translating or singing, I gathered my things and headed up the stairs. I had a whole list of tasks to complete before the next morning’s inspection.

Do you want to read more?