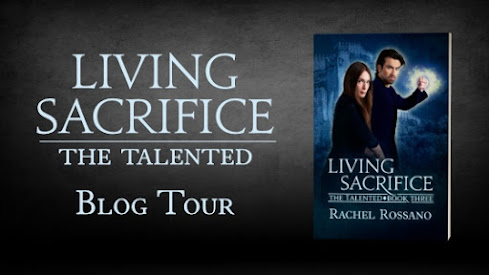 We are so excited to welcome Rachel Rossano to Lands Uncharted today to talk about her newest release, Living Sacrifice, the third and final book in her The Talented series! This finale released earlier this week and I am so excited for it. If you recall, I reviewed the first book in the series, Seventh Born, last month and gushed about the trilogy's heroine, Zezilia, being one of my favorite strong female leads. Rachel is going to share about the crucial decisions that make Zez such a strong heroine.

The Talented series concludes on November 2, 2020 with the release of the final novel, Living Sacrifice. The fantasy trilogy centers around two seventh-born Talented, those with the abilities of telepathy and telekinesis. The heroine of the series, Zezilia, chooses to defy the expectations of her family, her society, and her gender to fill roles that many consider beyond her. The process that brought her to these positions connect back to three crucial decisions in the series.

In the first book, Seventh Born, Zezilia discovers she has potential to be a great Talent with the ability to communicate via thoughts and to move things with her mind. Not only is this unexpected in a female, but it is also undesirable. Many in her culture consider female talents not worth training. Thankfully, she is discovered by a man who does not have such a restricted view. He offers her the opportunity to train as a Talent. When she accepts this invitation, she is very aware that she is choosing to defy both societal and familial expectations. However, she longs for something more than the alternative, marriage and children.

In the second book, The Defender, Zezilia has completed the first part of her training as a Talent. Ready to begin using her new skills, she takes on the role of defender of the sept son. She sees this as an opportunity to serve, support, and make a difference in her world. However, it becomes quickly apparent that her presence is going to cause more trouble for the sept son than help. Still, she chooses to face the opposition because she feels she has a purpose, a role that only she can fill.

In the final book, Living Sacrifice, through a series of events, Zezilia finds herself unexpectedly abandoned by her mentor. Midst her struggles to find a new purpose and place as her country struggles through a prolonged civil war, she receives a summons. The sept son has disappeared and the high king wants her to fill the position. Overwhelmed by the immense responsibility, Zezilia takes up the role of leadership. She didn't choose to accept because she wanted the power or because she would be widely accepted. In fact, she says yes despite knowing that many would reject her in that role. Instead, she takes on the load for the sake of the country and the man she has grown to love. She can't walk away when people need her.

In Zezilia's journey, she never rejects her gender. Although she longs to be more useful and more helpful, she never desires to be other than what she is. Staying true to the core of who she is, she does great things because she is willing to serve, love, take risks, and sacrifice for others. She gradually grows into this strength as the story progresses. Through a series of choices, she learns the skills to stand on her own feet and support those she loves.

I love Zezilia's journey! And it really makes this series fun, exciting, and inspiring to read! I was also cheering on the final stages of growth (including the culmination of the slow burn romance) in this book. 💖  Thank you so much for sharing more about Zez with us, Rachel. Here's a little more about her:

Rachel Rossano specializes in clean romantic fiction set in historical-feeling fantasy worlds. She also dabbles in straightforward historical romance and not-so-strict speculative fiction. A happily married mother of three children, she divides her time between mothering, teaching, and writing. She endeavors to enchant, thrill, entertain, and amuse through her work. A constant student, she seeks to improve her skills and loves to hear from readers.

You can connect with Rachel on her website, Facebook, and Amazon.
And now some more about Living Sacrifice which is available now! 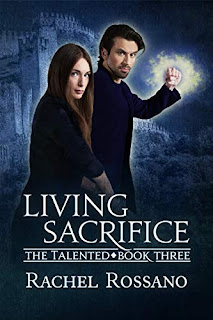 Separated, but still joined, they strive for freedom.Left behind at the sept son's compound, Zezilia Ilar struggles with the after effects of her prolonged commisceo-link with Hadrian. She devotes herself to caring for the wounded arriving almost daily from the battlefields. Pressed to perform procedures and make decisions far beyond her training, Zez grows in confidence and skill. All the while, she wonders if she'll see Hadrian again, fearing the worst possible news will arrive any day.Sept Son Hadrian Aleron fights to bring peace to his home nation. Allied with the new high king, he and a small army of Talented struggle to retake the capital city. Elitists, though scattered, continue to pick off the strongest of his men. As he battles the remnants of the commisceo-link and tries to organize the campaign, he begins losing himself to exhaustion. Only a miracle will keep him alive.
Living Sacrifice is the third in a trilogy. Reading Seventh Born and The Defender first is recommended.
Posted by Kimberly A. Rogers at 4:00 AM