Hello Readers! I'm so excited to share one of my favorite epic Christian Fantasy series! The Talented trilogy by Rachel Rossano is perfect for the epic weekend reading binge! 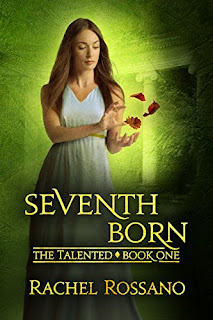 Imagine a world based on ancient Rome where the population is divided between the untalented and the Talented, people gifted with fantastic abilities such as telekinesis and telepathy. What's more the strength of their talent most often draws on their position as a seventh son. The seventh son of a seventh son being even more talented and powerful. There is an unofficial competition among parents to have that seventh son because he could become second only to the High King in power as the Sept Son. Daughters, on the other hand, are far less valuable and to have a daughter take the place of the much anticipated seventh son? A tragedy.

This is the world Zezilia Ilar was born into and she was the infamous disappointment. Something drilled into her every year by her father. Zez is one of my favorite characters because she is the Strong Female Character handled with the perfect balance of not being TOO hard/embittered or unreasonably naive. Zez's world tells her that the only way for a woman to please the goddess is by marrying well and to have children, preferably seven sons in a row. In fact, the requirement and expectation is for girls to be married no later than nineteen. At fifteen, Zez is being presented to the court for the first time and she is well aware of her duties to the family as the daughter of a lower king. Even though her heart isn't in the expected destiny, she wants to make her parents proud the only way she knows. However, an encounter with a somewhat eccentric Talented man sets Zez on a very different path when he discovers she is one of the Talented.

Zez's presentation at court leads to her meeting Hadrian Aleron, the man soon to become Sept Son, and results in her new life being trained by Errol Silas in the ways of the Talented. I love that Zez is a prodigy but she stays humble and sensitive, which is very true to the girl we meet in the beginning of the book. I also love her relationships with the different characters she meets during the three years of her training from Errol's daughters to Selwyn, one of Hadrian's older brothers, to Korneli. Selwyn is easily my favorite since he's the gentle giant hiding a wounded past tied to his previous job as a Defender (elite bodyguard) of the Sept Son.

Seventh Born is split between Zez and her journey through the training of the Talented and Hadrian's journey as the newly appointed Sept Son. Unfortunately, the poor man is a very beleaguered character with opposition from the high priest of the goddess. Hadrian's side of the story brings in ALL the political intrigue as he deals with everything from political resistance to a growing threat from a fringe group called the Elitists who are unscrupulous in their use of Talent as they deem themselves divinely appointed above the untalented. Intrigue not helped by the fact that Hadrian is considered a heathen and heretic for not following the goddess.

I am EXTREMELY picky when it comes to Christian Fantasy because eight times out of ten it will be far too awkwardly sermonizing to flow naturally for a satisfying story, which is not to my reading tastes. Fortunately, no one has to worry about that with Seventh Born. In fact, this is one of my personal favorites because the Christian worldview and faith elements have been woven perfectly into the natural framework of the story including one of the most moving, character appropriate conversion scenes I've read. The world and atmosphere of The Talented is very comparable to Ancient Rome, particularly when Christianity was in its infancy and not the state religion of the empire. There's a mix of known and secret conversions among the Talented in particular. However, the characters who are the mainstream goddess worshippers are treated with respect. This is especially true in regards to Renato, Zez's brother and Hadrian's chief assistant.

Seventh Born is a perfect setup for the rest of the trilogy. While the foundation work is laid for a slow burn romance between Hadrian and Zez (he had to promise she'd receive a suitable betrothal to get her father to agree to her training even though he wasn't enthused by this requirement), there really isn't much of anything to it in this book because they are on separate paths for most of the story and Zez is not truly interested in romance at the moment. Something that completely makes sense for the character arcs. I also love the unique aspects of Rossano's worldbuilding from the use of the Seventh Son mythos with her own distinct twist to the way she managed to give telepathy the unique hallmark of a person having a flavor/taste whenever they projected a thought. There's a lot of groundwork laid for the challenges facing Zez and Hadrian in the remaining two books. You can't help but look forward to what happens next as they head into Defender and Living Sacrifice, which is currently on preorder for November 2nd.

I highly recommend this book and series to fans of Morgan L Busse and Tricia Mingerink.

Have you explored the world of the Talented?