Weekend Reads: A Touch of Gold by Annie Sullivan (Laurie)

Happy Friday, friends! And happy almost-February! I hope you've been enjoying getting to know all our new bloggers this month as much as I have (and continuing to connect with our more established contributors, too, of course!)!

I've been reading so many fabulous books lately, it was hard to decide what to share about for today's Weekend Read! But I absolutely devoured A Touch of Gold by Annie Sullivan just this week, so it seemed like a winning choice :) 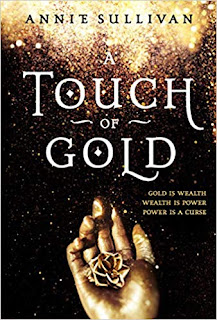 A Touch of Gold puts a fun, exciting new twist on the tale of King Midas and his golden touch. In this story, Princess Kora, the daughter King Midas turned to gold, was returned to human form but bears remnants of her father's curse, including golden skin and a variation on her father's famous ability. Years later, her father is slowly losing his sanity due to his strong connection to the other items affected by his touch. Kora lives in isolation, feared by everyone outside of her closest family members. But when her father's gold is stolen, further depleting his health at an alarming rate, she must place her trust in a handsome nobleman and the captain of his ship to take her on a journey to retrieve the precious items needed to keep King Midas alive. During the voyage, she faces adventure, danger, and betrayal as she learns that not everything is as it seems and she is capable of far more strength and bravery than she ever imagined.

The concept behind this story was pure gold (see what I did there...ha!). I loved revisiting the myth of King Midas in a new light, especially seeing the effects his actions had on his daughter. I'd be pretty traumatized, too, if my father turned me to gold! Kora was a great character to root for as she slowly inched out from under the shadow of her father's curse and into a future of her own making. Mysteries and plot twists kept me turning pages, and the romance had such a beautiful tie-in with trust and second chances. The fantasy world was filled with magic, mythical creatures, and exotic places to explore, all described with rich, engaging prose. I'd highly recommend A Touch of Gold to fans of retellings and adventures on the high seas, and I've started to hear a bit of hype about the upcoming sequel, A Curse of Gold - I can't wait!!


Have you read any good seafaring stories lately? Does anyone know of other books inspired by the King Midas myth?