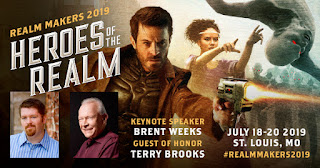 Today, for this Writers Life Post, I'm going to share some of my notes. (This is one the few times in my life I actually went home and typed up the notes from a lecture or conference!) To give you some reference, these notes comes from the classes I attended and Brent Weeks's (amazing) opening and closing key note addresses.

[Side note: This post is more focused on encouragement and wisdom in the writing life with some practical tips. If you want a dose of practical writing tips as well, check out my recent guest post on NobleBright about making villains your readers will want redeemed.]

Brent Weeks on his conversion to Christianity: “It only took a huge miracle and literature.”


Horace: The purpose of writing is first to delight, then teach.

1) Trust what God tells you. Put up your Ebeneezers (reminders of what God has done)
2) Sometimes what the world thinks is dumb is what God wants.
3) God uses our screw-ups. He shines a revealing light to show what is blinding us.


It took a long time and a lot of hard work and rejection and odd jobs and sacrifice (including not taking a normal, steady job and having a house, etc.) for Brent Weeks to start making it as a writer.

How to succeed in Hollywood (without losing your soul) by Dr. Ted Baehr

You’ve got to care about every scene.
A story starts with a promise that the story will lead somewhere.

A great script has a strong premise. It’s not obtuse. It must have a clear premise and direction.

No excuses. If you're not serious, get out.

A lot of people in the Christian community feel sorry for themselves. Don’t know why they do. We are more than conquerors in Christ.

From Michael Howell (Dr. Baehr’s assistant) on using bad language: Sergeant York didn’t have cussing, but you believed the character. You don’t have to compromise on language.

Have a heart for the people you are trying to reach.

Tips and Tricks to Capture Your Reading Audience by Ronie Kendig

Every story has been written, but not the way you write it.

If you’re questioning something, fix it.

He told story of Admiral Stockdale, a prisoner of war during the Vietnam War. It was a terrible story of torture and hardship, but Admiral Stockdale persevered. He created a system of communication with his men (they were in solitary confinement) using sweeps of the broom as Morse code. He gave them a code of conduct and told them what torture to expect that day because he went first. When he found he was going to be used for propaganda purposes, he hurt himself to prevent it—cut of his own scalp, beat himself unrecognizable with a chair because he knew they wouldn't showcase a disfigured POW. Eventually, the captors became lighter on him and his men because they couldn't break him. Later, when interviewed, he said it wasn’t the optimists who made it. They would say “we’ll get out at this next holiday.” They died after the holiday passed. The realistic ones made it.

He also spoke of locking himself away for a long time to try to finish a book by the contract deadline and the damage that did to his health and family and creative ability. His wife and kids needed his presence. He believed they needed his money. He saw his contract and fans as his top promise.

We have a duty to love those around us.
We can’t defraud and abandon our friends and family for art and expect God to say “well done.”

Don’t abuse yourself for art. Your body is the rugged temple of the Lord. It needs real exercise, food, relationships.
He mentioned Proverbs 6, where it speaks about begging to have your name erased—meaning, try to get out of bad contracts. He asked for extension on the book contract.

Recognize the lie that you don't have time for exercise. The truth is that you’re much more focused and creative if you take time to exercise.

If God made you a confronting Jeremiah, don’t try to be a comforting Isaiah.

He writes for kids he doesn't even know and may never know.

Put your light on a lamp stand for her dark night.

Ask God for wisdom. What is he calling you to do at this point in your life?

Exodus 31:6 “Also I have given ability to all the skilled workers to make everything I have commanded you.” To all who have aptitude for craft… He has given us skill. He’ll be with you. Be bold.

I'd like to close with this quote from Michael Howell and a reminder to keep writing. If that's your passion, stick with it!

Stay true to the gift God has given you… bring him glory and the rest will fall into place.