Several weeks ago, I stumbled across the Royal Institute of Magic series by Victor Kloss on Amazon. Book one was cheap so I decided to give it a try. Here's what Amazon has to say:

Like most normal people, Ben hadn't the faintest idea there was an Institute of Magic...
Two years after his parents’ sudden disappearance, Ben Greenwood stumbles upon a cryptic letter that could shed some light on their whereabouts. But before he can track them down, he’ll need to find the mysterious organization that sent the letter:
The Royal Institute of Magic.
To succeed, Ben will have to navigate a land filled with fantastic creatures and Spellshooters, where magic can be bought and sold, to unravel an ancient family secret that could hold the key to defeating an evil the Institute has been fighting for the last five hundred years.

Elizabeth's Legacy, written by recently deceased English writer Victor Kloss, is very British. The Royal Institute of Magic was founded by Queen Elizabeth I who somehow discovered the magic realm of the Unseen Kingdoms. She kept this side of her life hidden from the British government, and even had a son (contrary to the history books) who stayed in the Unseen Kingdoms to become the head of the institute. During her time in the kingdoms, the Queen found a much deadlier foe than the Spanish-the Dark Elves.

In book one, we find out some of the history of the Unseen Kingdoms and meet Ben, our modern day hero. The same threat Queen Elizabeth faced is back, and it's up to Ben and his family and friends to save the day. There are six books in the series that look to progress Ben's powers within the magic realm and the fight with the Dark Elf. 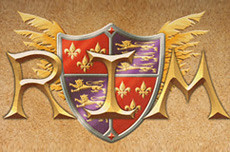 Thoughts:
Many reviewers mentioned this, and I have to agree. I couldn't help but notice several similarities between this story and Harry Potter. It bogged down the story a little for me, but the writer does include some fresh ideas. One of my favorites is the Dragonway where instead of a train, your cart is hooked to a dragon. It's like a roller coaster ride down a tunnel but faster!

Ben, the main character, lacks depth. He's a bit of a troublemaker and has the tendency to act first. However, his sidekick, Charlie, is an interesting character, my favorite actually. He is very smart, overweight, and showed more normal human reactions than Ben. Though likable, the characters aren't the main driving force of the book.

Overall, it was an enjoyable read, and I'm curious to see how the story progresses. If you're looking for a quick fantasy read, check it out.