The Power of Momentum (Laurie)

Whew! You guys, it's been almost two months since my debut novel released, and I feel like I'm still reeling! It's been an amazing (sometimes exhausting!) ride, and I thought today I would share a bit about my biggest marketing takeaway thus far.

Momentum is a powerful thing.

I first noticed the power of momentum when Common went up for pre-order. Once the purchase links were available, I tried to post on a day and time I thought quite a few Facebook friends would be around to see them. Some people clearly did, because soon after I was rewarded with a highly coveted "#1 New Release" flag on Amazon. Yay!!!

But here's the thing. Based on that initial post, I'm guessing that lovely orange flag would've lasted an hour or two, tops. Luckily I noticed it, and I couldn't help sharing my excitement. And that's when things really started happening. THAT post was seen by almost 2,000 people and shared 10 times! As a result, Common continued to be the "#1 New Release in Teen & Young Adult Christian Fantasy" for most of the week!! Not that I was checking... :)

I noticed a similar trend on my recent trip to my hometown in Wisconsin. I had reached out to my former middle school and high school to see if they would be interested in having me speak to their students. They were, and soon I had plans for both the Wednesday and Friday of my sons' spring break. Even though I knew it would make the trip feel even busier, I also asked a popular coffee shop if I could set up a book signing for that Saturday, and they put me on their schedule. Armed with three events in one week, I called the local newspaper to see if they would consider mentioning my visit and / or my book in an upcoming issue. They ended up interviewing me for a feature, complete with color photos of me and my book cover, plus a front-page headline! The school visits and book signing happened just last week and were a huge success (at least by my standards!), resulting in over 70 sales! Please know that I'm not saying any of this to brag or imply that I'm some kind of marketing genius, but rather to demonstrate the compounding effect of momentum in promotional efforts. I obviously can't do any kind of scientific study on book sales, but I have a feeling that in both cases the positive end result had a lot to do with the chain of events leading up to it. So much of book marketing is out of an author's control, and there's certainly no guarantee of a certain number of sales or a large reception no matter how well you position yourself. But I do think there's something to be said for momentum. While it would be so much easier to spread things out leading up to or following a book release, I can see more than ever why so many authors engage in blog tours, social media blasts, in-person book tours, and other marketing activities concentrated in a certain time period. It can be exhausting and requires a ton of hard work, but if you can achieve that illusive domino effect as a result, then it's so worth it! 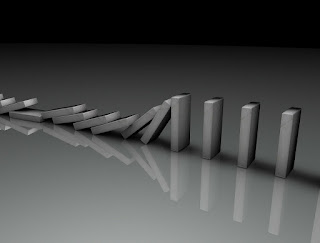 I'm not even close to having this all figured out, but whenever my next book releases, you can bet I'll be paying even closer attention to how I time and group promotional activities, just in case I manage to hit another momentum jackpot (or two!)!


How about you? Have you had any similar marketing experiences, or have you noticed anything similar in authors you follow? Any tips for us newbies??