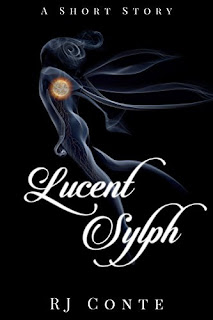 After reading several non-fiction books on writing, I needed a break and decided to read a short story I picked up in February.

“Lucent Sylph” by R.J. Conte chronicles a defining period in the life of Lucas Thissel, a twenty-fourth century teenage boy. Lucas becomes the unintentional champion of Nissa, an alien glass fairy that survives on love. But the bond between humans and Lucent Sylphs is delicate. Too much love or too little kindness from Lucas and Nissa will die.

The interesting premise and engaging characters of Lucas and Nissa lured me in. I enjoyed learning about the Lucent Sylphs and seeing Lucas’s and Nissa’s bond grow. And the ending... well, I’ll leave that for you to discover.

If your looking for a short read that offers an intriguing look at love and loss, check out “Lucent Slyph”.

Lucas Thissel has something he fears: an alien species of palm-sized glass fairies called Lucent Sylphs. They came through a portal from a metaphysical dimension, and they indenture themselves as slaves to human beings. Too much neglect or unkindness, and they will cloud over and disintegrate. Too much love and their hearts are overcome and burst.

And one has attached herself to him.
Posted by K.A. Cummins at 4:00 AM