Have you ever bought a book because of its cover? What about because of the costumes associated with the genre? Yes ... to both. I must admit a liking for steampunk costumes (the decent ones, of course). That and the recommendation of a friend enticed me to read Morgan Busse's steampunk novel Tainted, Book 1 of The Soul Chronicles. I wasn't disappointed. 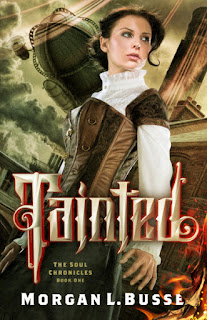 In this steampunk world of Victorian-ish clothes and manners, steam-billowing factories, airships, and mechanical birds, Kat Bloodmayne is the daughter of the lead scientist at the prestigious Tower Academy of Sciences. But her father never pays her any attention, not even caring to congratulate her on becoming one the first women admitted to the Tower. Kat refuses to let that bother her, because if it does, if she loses control of her emotions, she'll lose control of the strange power she has. And then something terrible will happen--fires, windstorms, magnetic storms--AND a part of her soul will die. Studying at the Tower tries her control to the upmost.

Stephan Grey, World City Police Force's rising star, leaves the force to become a bounty hunter after a personal loss. In the poor quarters of World City, he hears of strange, terrible happenings--the homeless and the sick being kidnapped, graves being robbed--but he can't get the authorities to investigate.

Then Kat loses control, using her powers to protect a friend, and is forced into hiding. She turns to bounty hunter Grey to help her find a doctor who can help her before  her soul dies and she loses all control. But they find a sinister evil deep in the very heart of World City.

Tainted was a good read. Interesting story world, likable characters, intrigue, romance, and adventure. The descriptions of machines/aircraft, etc., that are part the steampunk-ness weren't overdone. I particularly liked Kat's relationship with her housekeeper, Ms. Stuart, who raised her and is the only true family Kat has. Ms. Stuart loves and protects Kat despite Kat's occasional misuse of her power against her as a child. A sacrificial love and commitment when none is required or expected, as the housekeeper for a lonely girl, is always encouraging to read. As for Stephan Grey, I've always liked the detective characters with contacts everywhere, among inn keepers, smugglers, and you-name-it. I like him and Kat as a couple. However, his reaction to his "personal loss" (it's not hard to figure out this will happen, but I don't want to give it away anyway) seemed over the top to me, but that may just be me. There's also a scene at the end where a character who'd been disfigured earlier in the book comes chasing after them like the monster from an old horror story. A little over the top to me, but again, that's a matter of personal taste.

In conclusion, I enjoyed my foray into steampunk and want to read more of Kat and Stephan's story in the next book,  Awakened.

Have you read any steampunk? If so, what did you think of it?