Ophelia and the Marvelous Boy, by Karen Foxlee (Laura) 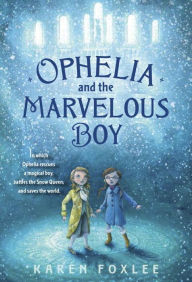 Ophelia and the Marvelous Boy is a mesmerizing story about perseverance, courage, and following your heart. A logical young girl named Ophelia, who recently lost her mother, moves with her father and sister during Christmastime to a new city, where her father takes a job in a museum. Not just any museum, this one has exhibits featuring teaspoons, clocks, mirrors, and mysterious paintings of bored girls--it also has a secret, hidden room with a boy locked inside. As Ophelia begins to hear the boy's remarkable tale, she learns she must find the key to release him as well as locate his magical sword and the One Other in order to defeat the evil Snow Queen and save the world. All before the Wintertide Clock chimes in the next three days. She's just not sure if she believes in all that magic.


This story drew me in from the first pages and didn't stop. The themes, told with striking yet simple detail and emotion, gave the story rich depth. The air of mystery as well as the friendship between Ophelia and the boy made it light and fun. There were certain questions that were not made very mysterious for the reader, like the identity of the Snow Queen, but it was believable that Ophelia didn't solve them until she needed to. And the museum was an adventure on its own--with its magical, frightening creatures; its stairways that lead up and down and appear behind doorways in rooms filled with sewing baskets; and its rooms that change or disappear or contain forests with whispering ghosts in them. The ghost girls were hauntingly real with specific, personal details asking "Who are they really?" that made them heartbreaking. So many elements of the museum and the story had just the right touch of spookiness without being over the top.


The themes around combatting death, frozenness, and all that the Snow Queen represents came across most powerfully to me in passages like this one, as told by the Marvelous Boy:

"All these sufferings...were recorded in ink on white paper. All the great tragedies and all the small tragedies, in
columns neatly and exactly measured, town after town, city after city, hour after hour, day after day, year after year.
They were cross-referenced. Cataloged. Filed away. Kept.
And they are the Queen's proof that the world is terrible, and they are her proof that all her arguments are right. That
everything should remain frozen and that death should reign supreme. Each day she walks in her library and touches
these memories, and they make her stronger."


Ophelia, of course having suffered her own loss, faces fears and doubts as she comes up against this darkness. Through all her bravery and intelligence, it is her turmoil and profound pain that heighten her character, expressed in simple statements, such as:


Her combined vulnerability, grief, and innocence against the Queen's wickedness poses a compelling journey as Ophelia learns to use her own intuition to not only listen to her heart but follow it. Another interesting note is that the beautiful pieces of artwork featured in this book and on the cover were done by Yoko Tanaka, the same illustrator for Kate DiCamillo's The Magician's Elephant. Another beautiful book about finding faith through darkness.


We've talked about several fairy tale adaptations on this site (see these posts from Elizabeth and Laurie). What are some adaptations you've read that really take on their own life and become their own distinguishable, classic story?