If you remember, I posted a review on the first two Out of Time books in the series, and in October, the last book has finally come out!

If you haven't started this series, I'd recommend checking out the book review I linked above, so the summary below won't reveal any spoilers ;) 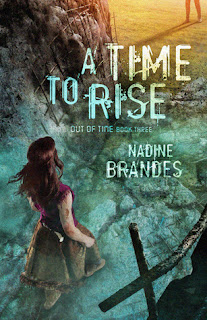 From Amazon
What more can you sacrifice than your life?
Parvin Blackwater is dead.
At least that's what the Council and the world thinks. But her sacrifice tore down part of the Wall long enough to stir up hope and rebellion in the people. Now she will rise again. Strong, free, and fearless.
Parvin and Solomon must uncover the mysterious clues that Jude left behind in order to destroy the projected Wall once and for all. Meanwhile, the Council schemes to new levels of technology in its attempts to keep the people contained. Can a one-handed Radical and a scarred ex-Enforcer really bring shalom to the world?


All the books in the series have covered an inspiring part of Parvin's faith journey, and this book was no exception. Her spiritual journey was both inspiring and relatable. The characters were multi-dimensional, inspiring me with their examples, yet still very much human and flawed. And, of course, I adored Solomon and Parvin's relationship. Parvin had to learn what it means to step back and let Solomon take charge. I suspect that this won't came naturally for me either... I seriously loved Solomon. He was always a leader, yet he was also completely behind whatever Parvin tried to do. He was kind, compassionate, and his faith and reliability helped anchor Parvin. After what they'd been through previously, Solomon would have done almost anything to make sure they're not separated again. The plot, as always, was interesting and kept me on my toes. I was never quite sure what to expect next. Being the last of the series, the book concluded beautifully, and its ending resonated with shalom.

Endings can be hard. What factors do you think determine a satisfactory ending? Have you ever struggled with your role in a relationship, like Parvin?