It's December already! And I have four great books for you to put on your reading wishlist!

I decided to do something a little different to close out 2022. Instead of reviewing a single book, I thought it would be more fun to list the four books I'm most excited about reading in the near future. The first three books will release in December and the fourth will release in early February. So here are my top picks in order of their release dates. I can turn into a housecat.It’s a fun magic, except in a world filled with vampires and werewolves, it doesn’t exactly make me a powerhouse. Instead, the supernatural community has classified me as an outcast, which means one thing: Picking on me is open season all day, every day.The local fae are the worst of all, and it’s during one of their regular “capture the cat-girl” sessions that I shift into my cat form and meet HIM for the first time.Noctus is so powerful his magic radiates off him like a sun, and my fae captors can barely look in his general direction. And then my life gets even more terrifying when Noctus decides to take me with him. As a pet.Why did he pick today to “adopt don’t shop” a cat?It gets worse when I realize he’s an elf, a ruling race of supernaturals that was supposedly killed off centuries ago.But he’s not just any elf, no. He’s an elven king, with heaps of secrets to protect. Secrets that I am quickly learning since he includes his new pet in everything from breaking into buildings to inspect classified paperwork to tracking down sketchy supernaturals.All this means if he gets even a hint that I’m not a real cat, I’m going to find out firsthand how elves treat their prisoners.So, escaping Noctus is priority #1. How hard can it be? (Answer: very.)

King’s Captive is the first book in the Gate of Myth and Power urban fantasy trilogy, and is part of the Magiford Supernatural City world. It features elves, fae, werewolves, and vampires, and contains an adventure-filled and hilarious take on the Hades and Persephone myth. It’s packed with humor, battles, and a sweet, slow burn romance between an outcast magic user and the deadly king of the elves.

My Thoughts: I'm so excited to return to the wonderful world that is Magiford! Shea writes such a fun light noblebright urban fantasy world and with so many great layered characters (main and secondary) that every entry into the Magiford Supernatural City universe is a guaranteed delight. And this time there are ELVES!!! With the new trilogy launching NEXT Friday, I cannot wait to read how Shea has adapted Hades and Persephone into her own unique spin. 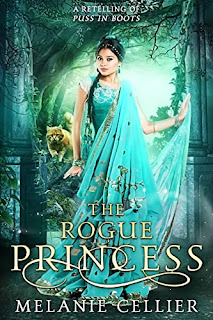 #2 - The Rogue Princess: A Retelling of Puss in Boots (Return to the Four Kingdoms Book 5) by Melanie Cellier

Kali has always dreamed of adventure, but she never expected to find it in the company of a talking cat. Puss definitely has an agenda, but he isn’t sharing it with her. All she knows is that he wants a miller’s child to accompany him across the Great Desert to the mysterious lands beyond.Kali doesn’t mean to let her opportunity go, even if she doesn’t understand the purposes of the mysterious creature at her side. But when she encounters thieves and misadventure, she realizes something bigger is underway. Her people are under threat, and she can’t turn her back on them—no matter how irritated she is by the fellow traveler who turns up wherever she goes. Kali knows Xavier isn’t to be trusted, but she and Puss need his help. Only together can they avoid the traps laid for her and uncover the truth.In this reimagining of the classic fairy tale, Puss in Boots, a miller’s daughter will have to trust a tricksy cat and a handsome young man if the three of them have any hope of saving her people.

If you enjoy clean romance, adventure, and intrigue, then try the books in the Return to the Four Kingdoms series now! These interconnected fairy tale retellings each feature a different heroine who finds herself friendless in a strange land and who must fight to save her new home and win her happily ever after.

My Thoughts: After traveling across the desert and exploring new kingdoms for the last two books, we're headed back to the Four Kingdoms proper in this latest entry. Three series into this world and I always enjoy the way Cellier twists familiar and sometimes obscure fairytales into fresh interpretations. This time we have the added bonus of a talking feline. The blurb promises an adventure and I am extremely curious to see how Cellier puts her own spin on Puss in Boots. 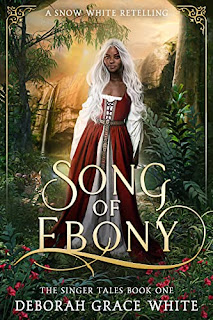 In a city trapped in the treetops, one princess’s song will change everything

Crown Princess Bianca has always been unusual, from her snow-white hair to the strange way her words dance. But just like every other Selvanan, she’s restricted to the trees, unable to set foot on the deadly soil. That is, until her stepmother betrays her on the eve of her coronation, sending Bianca to the ground to die. Except the jungle floor is not what Bianca expected—from supposedly mythical elves to magic gone wild, it seems there’s much she didn’t know about both her kingdom and herself.

Prince Farrin never intended to get trapped in Selvana forever. He only came to find a cure for his brother’s terrible affliction. But after two years, he’s no closer to his goal. And his continued survival depends on his ability to navigate both the treacherous Selvanan jungle and the ways of the bargain-loving miniature elves.

When he crosses paths with an exiled princess, his course takes an abrupt change. It’s not just because he’s rattled by his all-consuming determination to keep the princess safe. More Selvanans than Bianca will pay with their lives if the pair can’t find a way to outwit her enemies and harness the power of Bianca’s voice.

Song of Ebony is the first installment in The Singer Tales, a series of interconnected standalone novels set on the continent of Providore, where magic is harnessed by singers. Each story follows a different heroine navigating everything from miniature elves to brutish giants as she chases her own happily ever after. If you enjoy strong heroines, clean romance, and fantasy worlds with a dash of intrigue, discover the world of The Singer Tales today.

My thoughts: White is a newer author but I've really enjoyed reading her different series from epic fantasy to fairytale retellings. Her Snow White retelling sounds so intriguing! I'm especially looking forward to finding out more about the magic system of singers! 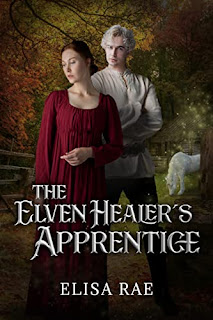 Merlon, the king of Eldarlan’s healer, hides his soft heart beneath a prickly exterior. Despite a traumatic childhood, he strives to excel as a healer and an elf. But he gets more than he bargained for when he rescues a human woman from certain death right before being snared in the curse put on the king of Eldarlan.Left to fend for herself in an absent elf healer’s compound, Adela tries to be useful. The patients call her the healer’s apprentice. Something the healer rejects when he finally returns. Despite his grumpy manner, the healer displays a strange mixture of kindness and care. Intrigued, Adela suspects the healer hides more than he reveals.

The Elven Healer’s Apprentice is a light, fantasy romance novella about a romance between an elven healer and a human woman. It features a grumpy sunshine romance where opposites attract when they encounter forced proximity and jeopardy.

My Thoughts: Some of you may remember that Elisa Rae is the magical fantasy pen name of our own Rachel Rossano and she's releasing the fourth book in her elven series! I have loved the three previous entries in this series. The elves are fun and both unique yet familiar. The grumpy healer Merlon has been one of my favorite side characters from the previous books and I'm so excited he's getting his own story! And a human love interest who can hold her own with this grump with a heart of gold! February can't get here soon enough!

This is my final entry for 2022 so I wish all our readers a Merry Christmas and Happy New Year. May your reading stockings be filled with excellent reads!