Launch your November curled up with a fantastically fun reimagining of the King Arthur legends!

King Arthur and Her Knights: The Complete Series by K.M. Shea 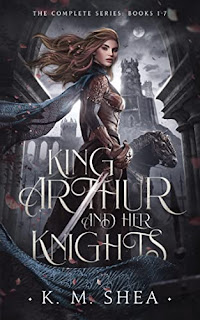 I have to admit that I was not expecting to love this series when I first picked it up at the beginning of this year. Genderswapped King Arthur? Or, more accurately, a modern day young woman magically transported back to the days of King Arthur and she's going to be the new king? Despite my love for K.M. Shea's other series, I was skeptical that I would enjoy this one on the same scale. I was very wrong. And I'm so glad I finally read it!

This is such a fun series! Britt Arthurs is transported from modern day England to the days of King Arthur (right before Arthur is supposed to pull the sword from the stone). The reason? Merlin is absolutely determined to see the warring little kingdoms of Britain united under one king. And he won't let minor details such as the real Arthur running away or that his magic has brought a woman from centuries in the future instead of a man stand in the way of his schemes to see Britain united. And he's not an old man either. This Merlin has more in common with the BBC tv series than the aged wizard of legend as far as looks and age are concerned.

I love Britt and her journey. She started out knowing little of the King Arthur legends aside from what was in her guidebook (which made the journey back in time with her) and a deep loathing for Lancelot (and Guinevere by default). Her starting the Lancelot Hate Club was a hilarious response to the usual fawning over the man. Especially when you find out who else is part of the club. But Britt is just as determined as Merlin about certain things, such as teaching her knights to be the chivalrous men of legend and acquiring the Round Table if it's the last thing she does. Britt has such a great growth arc in this series and even her knowledge from the guidebook serves as part of her foibles.

Britt and Merlin have a fantastic and funny relationship filled with all the feels, especially as the series moves on. But I also adore her knights and their relationships with her as well as the different ways they change throughout the series. Sir Kay is an awesome big brother to her, even if he can be a smidge overprotective. ;)

Whether you're familiar with the King Arthur legends or only know bits and pieces, I highly recommend this series! With the trademark K.M. Shea humor, adventure, and sweet romance, this collection of six novellas and one novel is nearly a thousand pages long, which makes it a fantastic way to spend the weekend! And as a bonus, the collection is currently on sale for a limited time!