I love journals. Whenever I see a blank stack of paper, my fingers itch with the urge to find the nearest pen and fill each page with line after line of story. Add a stylish cover and the sale is practically made, whether I need a new journal or not. This minor compulsion is so strong that my elder son is prone to pushing me ever-so-subtly past the stationary aisle of whatever store we happen to be in at the time.

One lovely side-effect of my addiction is the benefit a new journal brings to my writing. As already mentioned, a new journal begs to be filled, so it can be a great means of inspiration for me on those days when it’s oh-so-hard to write. Not only is a journal a great place to sketch out scenes for my current work in progress, it’s also a fabulous place to keep notes and ideas.

At least, until I need to find those scenes, notes, and ideas.

Because of my love of journals, I have a whole collection of them. Flipping through them to find a half-remembered story idea or a tidbit of inspiration is time consuming and, often, quite frustrating in spite of the elaborate indexing and coding system I’ve developed to prevent such frustration-inducing experiences. I had given up on finding any better system, ascribing the time lost while questing through journals as part of a writer’s lot, until I learned of a revolutionary new idea: note cards. 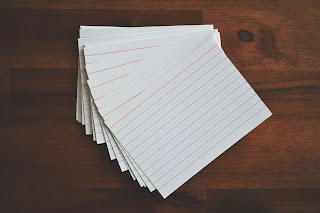 In 2018, I discovered the phenomenon that is podcasting. A short while later, I drove through a suburb of Houston listening to podcasts randomly shuffled from the list on my phone. (My vehicle’s audio system syncs to my phone. How cool is that?) As I sat in rush-hour traffic waiting for my turn to be cut off by a light that changed color much too quickly, my phone landed on a show called the Hope Writers podcast. On episode 03-07, titled “How to Capture and Organize all of Your Writing Ideas,” the hosts of the blog discuss a way of using note cards to organize writing ideas and inspirations. The system is so much like the one that I teach to my students as they compile information for research papers that I felt as if a 2x4 had struck my head. I swear I heard the timber plank crack as it figuratively crashed upside my skull.

The basic idea is this: instead of carrying a journal in which to scribble whatever piques your fancy, carry a deck of note cards. Jot one idea per card then, when you’re ready to begin a new project, organize those cards by topic and viola! Another application is to organize those cards by idea (setting, character, conflict…) and file them in a box according to whatever system works best for you. It sounds so simple, but I cannot tell you how much this idea has revolutionized my writing life. I found a durable but light-weight note card pocket at my local office supply store, so I can keep my note cards in my purse or bag without worrying that they will become tattered. This has allowed me to downsize my Mary Poppins-style bag to a cute purse and reduce the weight I consistently carry on my shoulder because of said bag. I don’t leave tons of unused pages in a journal because I left them blank in case I needed to add to the idea already begun there. It is easy to punch a hole in the note cards and add them to whatever upcoming story binder they belong to. (You know: those stories you can’t write yet but know you will soon. I collect those ideas most likely to be developed into full stories in three-ring binders of their own and add scene, conflict, and character details as I find them.) It’s also a great way to inspire creativity: find a few cards that connect in an intriguing way and you’ve got a new story idea or novel.

The possibilities are truly endless. Not only that, this system allows me to actually finish a journal to the point where I can pack it away and actually justify my next foray into the stationary aisle or—even better—office supply store.

While I’m not a fan of reinventing the wheel, I do appreciate discovering ways to make it run more smoothly. If you have any organizational tips or tricks you can’t live without, I would love to hear them in the comments below.

This blog was originally written for the #AuthorToolboxBlogHop in March of 2018.