I am a huge fan of fairy tales. I mean the old classic, Brothers Grimm type. It began when I was an early teen, on a visit to my grandparent’s house. I was in a fit of pique with my cousins, and I was bored out of my mind, so I half-heartedly picked over some forgotten books gathering dust on a bookshelf in a back room. I found The Blue Fairy Book, opened it without any real expectation of even being remotely interested, and fell into a genre that has dominated my literary preferences ever since.

I think that’s why I was so drawn to The Raven Boys by Maggie Stiefvater, which resonates with the same vibe that forever defines fairy tales for me. 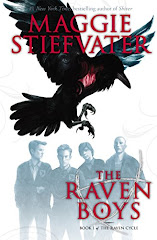 I’m not sure when, exactly, I fell in love with this book, but I noticed that love by page 60, when the author produced two quotable lines within two pages (one which just happens to already be a personal mantra). This is an urban paranormal read that I couldn’t put down.

Blue Seargent, the story’s protagonist, lives in a house full of women psychics. Not carnival fortune-tellers, but legitimate psychics. Her talent? Amplifying the power of others. That’s it. That’s also why it’s so surprising when Blue interacts with the spirit of a boy named Gansey on the corpse road. What’s even more surprising is when she meets him in person shortly afterward and becomes caught up in his quest to find the body of the Welsh king Glendower. Blue’s not sure whether she wants to kill Gansey or kiss him, but either action would mean his demise.

This story is filled with so many things that I love: Welsh mythology, a snarky protagonist, humor, and a genre-based story that doesn’t rehash all of the old genre tropes. And ravens! Did I mention the raven?

I normally don’t read paranormal stories, but the title and blurb of this book caught my eye, so I gave it a try. I’m so glad I did! I devoured the book in two sittings, and am on my way to buy the rest of the series.

A caveat for those who are sensitive to things of the occult (in the way some are sensitive to the magic in Harry Potter): This is a paranormal story, so it deals in a minor way with things like tarot cards, demons (who are presented as evil, not desirable), and witchcraft (also presented as undesirable). If any of these things is a sensitive area for you, you may want to pass on this book.