For this episode of Weekend Reads I am SO excited to get to share the upcoming release by Naomi P. Cohen, The Fey of Castle Garden! 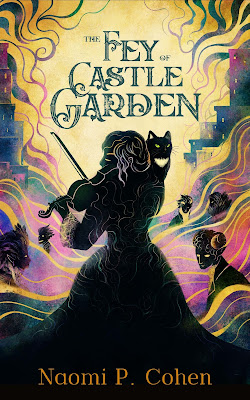 New York City, 1859: On Samhain night, a mage pledged to the Wild Hunt is violently murdered. Tensions between the Hunt and Triona, Fey Queen of Central Park, heat up and threaten to boil over into a full-scale conflict. Sofia De Benedetti, mage and musician in Triona’s court, has her hands full making enough money to support herself and help women who are down on their luck in the rough corners of the city. Now a fey war looms and a mage killer is on the prowl. Everything Sofia has built since immigrating, and her life itself, is at risk. With the help of a cait sidhe and a tempestuous storm fey, Sofia must find the murderer before the streets of the city erupt into a magical battleground.

This book is utterly magical. It's a shorter read, one that feels like treating yourself to a tiny, beautifully artistic, and deliciously sweet fancy dessert from a five-star restaurant.

I'm a big fan of literary fiction, and while this book has a very clearly-defined plot unlike the literary genre, Cohen's vivid, luscious descriptions echo the enchanting tradition of L.M. Montgomery (my personal favorite).

This book also boasts a very unique setting, but one that meshes perfectly with the genre to make it highly unique. Cohen has done a fantastic and well thought-out job of interpreting and expanding urban fantasy and Irish mythology tropes into new realms. As I was beta reading it, I kept finding myself thinking "I want to live in this world!"

The Fey of Castle Garden is set to release on October 31st, 2021. If you like Irish mythology, urban fantasy in historical settings, gorgeous descriptions of magical creatures and realms, and Jane Austen-esque explorations of a society's inter-class dynamics, you will want to have this book in hand to begin reading this Halloween!