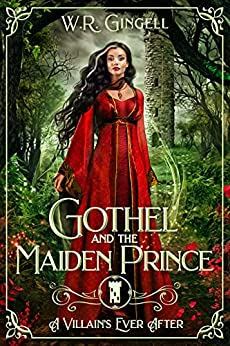 I’m a big fan of WR Gingell’s books, particularly the City Between series, so when she shared about a series entitled A Villain’s Ever After it caught my attention. This series of novellas offers reinvented fairy tales with the traditional villains cast as protagonists, written by a variety of authors.

Fairy tales from the perspective of the villain have become more mainstream in recent years, with Disney offering a number of movies and books along these lines, but there’s always room for a new twist on the old tales (or at least that’s my perspective as a fairy tale enthusiast!).

In Gothel and the Maiden Prince, Gingell offers her version of Rapunzel, and as the title suggests Mother Gothel takes center stage. The prince is kind and sensitive, which makes him a good foil to the forceful, wary Gothel. The length constraints of a novella can make it harder to convey character growth, but Gingell achieved a satisfying arc for all the primary characters—although I would have loved to see what came next for Gothel, Rapunzel, and the prince!

I found this an engaging rendition of Rapunzel in an intriguing setting, and I believe Gingell intends to return to the world she created for more fairy tale retellings. If that’s the case, I’ll certainly be picking them up.

If you’re looking for a quick yet satisfying read, I would check out Gothel and the Maiden Prince. And if you have interest in the series as a whole, take a look at our interview with one of the other series authors, Allison Tebo.

Please note, I have only read two of the novellas in this series, so I can’t say if the series in its entirety is clean. Also, trigger/content warning/possible spoilers….


childhood sexual assault and abuse are discussed in Gothel and the Maiden Prince.