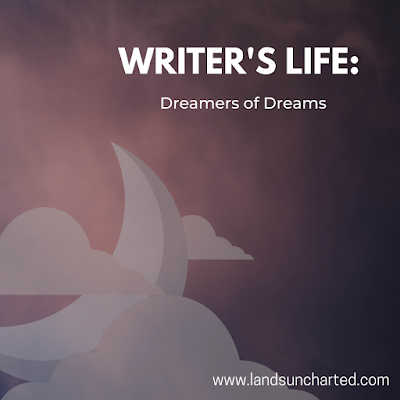 For as long as I can remember, dreams have played a role in my writing life. I’m not talking about daydreams, though certainly those are vital, but actual dreams that come by night. In my current manuscript, a gaslamp mystery novel, the first glimpse of the protagonist came to me in a dream. Jessa has evolved a great deal, but those initial glimmers of appearance and personality sprang into being in the night, as did the core concept of the murder mystery (in another dream, years apart). These glimpses and glimmers take daydreaming, brainstorming, and creative work to become an actual story, but I love discovering story seeds in dreams.

And apparently, I’m not alone. CS Lewis talks about having many dreams of lions, before Aslan sprang into his mind, and from there, the entire Narnia series took flesh. Tolkien speaks of recurring dreams of a tremendous wave consuming a city which gave rise to his tale of the Downfall of Numenor. There’s even a book on writers dreaming (which I have yet to read, though the subject is certainly intriguing) including authors such as Stephen King and Anne Rice.

Our thoughts and creativity run unfiltered by logic as we dream, so it makes sense that we would find in them unusual ideas and inspiration. When I find story seeds in dreams, they’re often dreams carrying emotion that bleeds over into waking, which in turn makes me eager to dig deeper, furthering creativity and story-telling. Certainly, I can’t make these inventive dreams happen, and I have my share of the peculiar or nonsense dreams (and nightmares, unfortunately) alongside those that provide a creative spark, but I appreciate the way God designed us to dream and create even in our sleep!

Are you a dreamer? And if so, do dreams ever fuel your stories? I’d love to hear your experiences.