“It does seem that a fantasy, working out in its own terms, stretching you beyond the normal concerns of your own life, gains you a peculiar charge of energy which inexplicably enriches you. At least, this is my ideal of a fantasy, and I am always trying to write it.”

There are times in every author’s life when nothing goes well. Writing projects have stalled. Characters refuse to talk. Words dry up in the journey from the brain to the keyboard. There they shrivel into dead and dull sentences on the screen. Editing makes you hate your work. You worry you are cutting the life out with each change and fear you will only have drivel when you finish.

ince childhood, I have had one remedy that has always helped me when things get so desperate. I pick up a Diana Wynne Jones novel. Her writing style is similar to J. K. Rowling’s but better. Her works range from whimsical and silly to dark and heavy. One can always count on humor and strangeness, quirky characters, and winding plots. I always find something new to admire when I reread them, and without fail, they always inspire me to write. This brings me to my recommendation for this Friday: The Chrestomanci Series.

Based on the concept that there are multiple related worlds fractured at various points in history into alternative courses of events, the childrens to YA series focuses on the influence of one government official, Chrestomanci. While everyone else in the multiverse has alternative versions of themselves, he does not, giving him the unique attribute of having nine lives and gobs of magic.

The series begins with The Lives of Christopher Chant. Christopher grows up with estranged parents, a long parade of governesses, and the ability to dream vividly. Strangely, though, when he dies in his dreams, he dies again when he wakes up. 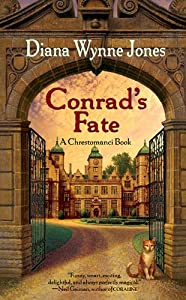 Conrad’s Fate is set after Christopher has been adopted by the current Chrestomanci. Conrad, who has been manipulated into thinking he has a terrible fate due to his past lives, indentures himself into service in a grand manor house. There he encounters Christopher, searching for a friend despite Chrestomanci’s objections. All kinds of shenanigans ensue.

Charmed Life is the first of the books set when Christopher has become the Chrestomanci. Eric Chant and his sister have been orphaned. Eric appears to have no magic, but his sister has gobs. She is determined to get the attention of Chrestomanci and succeeds. But the result isn’t quite what any of them expected.

The Magicians of Caporna is a different kind of book. I have only read it once (unlike the probably 10 to 20 times I have read all the others). Even as a child, when I read this book, I didn’t like this one. It lacked everything that I loved about Diana Wynne Jones’ writing. All I recall is that it is basically a variation on Romeo and Juliet.

Witch Week is the first of the series I read. It is set in a world where magic is prevalent and also very prejudiced against. All kinds of events bring about silly situations and crazy interactions at a school as children deal with rumors, bullying, and teachers. I vividly remember laughing my way through the whole raining shoe scene. Now I want to reread it again. 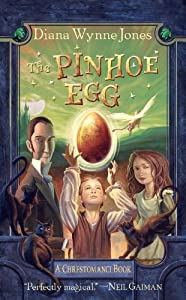 The Pinhoe Egg was the last book in the series, both in chronology and publication order. This might be why it, along with Conrad’s Fate, is one of my favorites of the series. In this book, many favorite characters (Christopher, Cat, and others) return. We get to see the castle residents from the perspective of Cat and an outsider. The world is opened up, leaving so much possibility. Best of all, it still has all of Diana Wynne Jones’ fun sense of humor, quirky characters, stupendous world-building, and tightly worked plots.

For a fun, light, entertaining adventure full of inspiration and amusement, do pick up any of the above books (except for The Magicians of Caporna) for an escape this weekend.

I know what I will be rereading.

What are your favorite books to reread?