Weekend Reads: The Werewolf of Whitechapel by Suzannah Rowntree (Sarah) 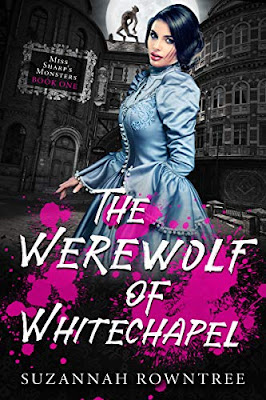 Gaslamp fantasy, most commonly set in the Regency, Edwardian, or Victorian eras of our world or in a secondary world with a similar feel, weaves the supernatural alongside everyday life, often with a Gothic flare. It’s a fantasy sub-genre I love (so much so that I’m currently working on a gaslamp mystery series), and I’ve enjoyed discovering some new or new-to-me authors in this category recently. In the past, I’d read several of Suzannah Rowntree’s fairy tale retellings, and when I saw the announcement for The Werewolf of Whitechapel, the first book in the Miss Sharp’s Monsters series, I immediately picked it up and found within a satisfying story.

The Werewolf of Whitechapel provides an intriguing alternate history by offering an interesting theory: what if Victorian-era Europe had been ruled by monsters? Werewolves, vampires, and sirens compose the royal bloodlines of Europe, with England standing as the lone exception.

Our protagonist, one Liz Sharp, remembers nothing of her past, but has received specialized training from Saint Boltoph’s to protect members of the royal family from anarchists who may rebel against the rule of these monsters. By virtue of becoming a lady’s maid/bodyguard to Princess May of England, Miss Sharp will find herself interfacing with the royal families, and therefore surrounded by the monsters she loathes—the sort of monsters who left her scarred and also imparted to her preternatural abilities. 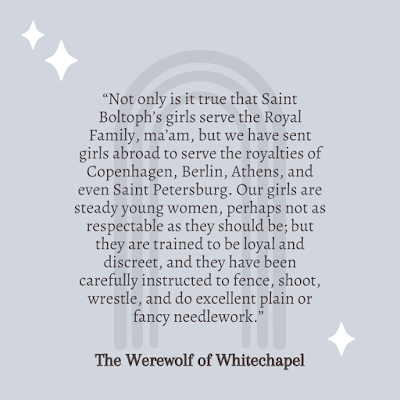 When Miss Sharp’s dearest friend meets an untimely end, the precarious position of the everyday citizen in this world becomes abundantly clear. Miss Sharp is confident that a werewolf murdered her friend—and indeed, evidence supports it, but no one will pursue this line of investigation. After all, who can hold those in power accountable?

The murder of her friend pulls Miss Sharp into the mystery surrounding not only her death, but others, and of course, into danger as well.  Accustomed to independence and self-reliance, Miss Sharp must learn to work with unexpected allies or else she may find herself in over her head. I’ve always appreciated tales of unlikely friendships, and the unfolding relationships between very different individuals enhances the story. The way the world-building unfolds makes for a compelling tale, and the voice suits the era well. If you enjoy gaslamp fantasy or mysteries with mystical monsters, definitely give this one a try!

Are you familiar with the gaslamp subgenre? Do you have any favorite tales in this category?