Story Snippets: The Half King (Mary)

Hello everyone! Today I'm super excited to share a brief peek into my current novel project, The Half King! (I'm also a little nervous, to be honest - this is the first time I've ever let anyone take a look inside this project so far!)

The idea for The Half King came to me when I was working as a tour guide at a science and history museum. Every tour ended in the theater room, where guides could share a variety of video presentations with their tour groups, based on the guests' interests. The most popular video by far was one about the legend of Saint George and the dragon. One afternoon while sharing that presentation with a tour group, I was suddenly struck by the part of the story where, after Saint George has slain the dragon, the king offers him any reward he wants--even to half of the kingdom.

Of course, Saint George replied that the only reward he wanted was to tell the people of the city about Christ, everyone was baptized, and it was all very wonderful.

But it got me to thinking: many times in history and legend we hear of kings offering various people any reward they desire, "even to half of my kingdom"...so why does no one ever take them up on that? Then I started to wonder what would actually happen if someone did...and The Half King suddenly took shape.

So without further ado, here is a peek into the world of Edwin Renwickson! 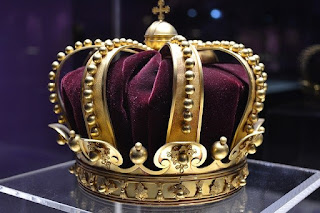 ***
Background: Edwin began the morning shucking the day's supply of oysters for the inn his family owns and operates. While doing so, he discovered a green pearl--said to be good luck. With it, he hopes to improve his family's fortunes. He plans to have the pearl assessed, as soon as he has finished running a little errand...

The midday meal kept Edwin busy well into the afternoon, as usual. Once the majority of patrons had been fed and left, the bulk of the cleaning up from the meal had been done, and Mam and Gemma were busy preparing for the coming evening meal, Edwin occupied himself shoveling the shell heap in the yard onto a handcart, and set out for the builders’ yards. The builders bought shell by the stoneweight, for use in constructing tabby walls, as mortar, and as paving material. They paid next to nothing for the shell, but it got rid of the piles of shells the inn threw away, and every copper was something. After the construction yards, though, he would visit the jeweler, and assess the extent of the day’s good fortune.

Edwin pushed the handcart out of the yard, closing the gate behind himself, and down the narrow alley onto the street. He hadn’t gone far when, ahead of him, he heard a strange, clattery rumble...followed by a scream.

A crash came after the scream, and the rumbling sound was getting louder. Ahead, where the street curved, Edwin saw people begin to scramble out of the street, diving into doorways and alleys. Something was coming.

And then it appeared—a closed carriage pulled by four horses, all of which were galloping in blind panic down the too-narrow, too crowded street. An instant later, Edwin saw the reason for their panic: the back of the carriage was on fire!

Leaving his handcart, Edwin moved into the center of the street, trying to gauge his position to catch the horses as they passed. Not too far away, then he might miss. But certainly not too close, where he would get himself run down and trampled.

The horses were nearly upon him already—he felt instinctively that this was a terrible plan, but there simply wasn’t time to think of a better one. Edwin wasn’t quite sure he was thinking at all, but rather just reacting.

As the horses came nearer he stepped just barely into their path, his hands upheld, calling “Whoa! Whoa!”

They shied a little at the obstacle he created, and their pace slowed—but only a small amount. Still, it was enough that Edwin was able to reach and catch the harness of one of them, hanging on as he was jerked along with them, pain shooting up his shoulder and into his back from the force of the jolt. He managed to keep his feet, though, running but only touching the ground every second or third step.

Another scream, followed by a shrill voice shouting: “What are you doing?!” but he had no time to think about that.

He managed to jump enough to catch a foot in the harness and pull himself onto the horse’s back, where he hauled back on the reins with one hand, reaching to catch the reins of the horse beside him with the other. They resisted, but Edwin held on, and his efforts slowed the animals slightly, but not completely—and there was another curve in the road approaching, this one much sharper than the previous one.

The horses skidded and fought to maintain their footing, and succeeded, but the carriage tipped toward the outside of the curve and crashed onto its side. Two of the horses went down immediately, and Edwin was forced to jump clear as the horse beneath him stumbled and went to its knees.

He tumbled from the horse’s back—that was his first time ever to ride a horse, he realized—and ran back to the flaming carriage. He leaped onto its side, pulled the door open vertically, and peered in. There were two women tangled in the sea of their own dresses, lying on the side of the carriage that had become the floor in the overturn.

“Are you hurt?” Edwin shouted, lowering himself through the door. “Can you climb?”

The interior of the carriage was filling with smoke, and the women were coughing.

Edwin grabbed the nearest one by her arms and pulled her to her feet. Outside he could hear shouting, men trying to put out the fire, others climbing onto the carriage.

“Here!” He caught the woman under her arms and hoisted her up. Other hands grabbed hold of her and pulled her up and over the doorframe to safety.

Edwin pulled the second woman up and lifted her up through the door of the carriage in the same way. Once the others gathered around had pulled her clear of the door, Edwin pulled himself up into the opening, and was helped out as well.

When his feet were on solid ground again, he saw that men had nearly smothered the fire, and others were releasing the horses from their harnesses and helping them struggle to their feet. The two women stood a few steps away, coughing, asking each other if they were unhurt. One of them had a torn sleeve through which a scratch showed on her arm, and her companion had bent down to examine it. When she straightened and turned to look at those gathered around, a collective gasp rushed through the onlookers, and people left and right fell to their knees.

Edwin was bewildered, until someone nearby tugged his arm and hissed “On your knees, man! That’s the princess you’ve just pulled from that carriage!”

Edwin felt his knees go weak and drop him to the ground with no effort on his part. The princess... His heart pounded and he thought he might be sick all over the street.

He didn’t know what the punishment was for such an act, or if the nature of the circumstances would make any difference, but he certainly did not want to find out. The thought of fleeing crossed his mind, but surely the men who had witnessed his deed would report him—these were men he knew, neighbors—they would know who he was, and none of them would wish to take the blame upon themselves.

He thought of the pearl in his purse, with a bitter urge to fling it into the gutter. Some good fortune this was.

Horses and riders bearing the royal standard galloped into view, shouting and moving to surround the princess and the woman with her.

“Your highness!” one of the riders shouted, jumping to the ground and bowing, “are you unhurt?”

“I am unhurt,” the princess answered, “thanks to the valiant efforts of that man, there.”

The horses parted and Edwin could feel eyes on the back of his head, neck, and shoulders, as he bent as low as he could over his knee.

“Yes. The carriage overturned and was burning, as you can see, and he jumped into the carriage and pulled us out, at great risk to himself.”

Edwin’s mind raced, his heart still pounding. It certainly didn’t sound like she was angry or outraged about what he had done...

Edwin cringed, head still bowed low over his knee, certain he was the one being addressed.

Edwin dared a peek to see if he was the one being spoken to, and saw the man—a knight, by the look of him, towering over him, staring directly at him. Edwin cautiously got to his feet, trying not to show how badly he was shaking, and stood straight but kept his head bowed.

Edwin swallowed. He’d hoped they wouldn’t ask; he didn’t want his family to suffer for what he’d done, but he couldn’t lie about it, either. It would be easy enough for the palace authorities to find out the truth.

“Edwin Renwickson, rest assured King Osric will hear of your service in rescuing Princess Celise. Where is your place of residence?”

Edwin raised his head, taken aback at the realization that King Osric himself would hear his name, Edwin Renwickson. “I—I live and work at The Half Shell.” He pointed up the street. “Just back that way.”

The knight nodded. “Someone will be sent in a day or two to thank you officially for your service to the crown.” He raised his face to shout to the gathered onlookers. “You are all dismissed! Be about your business!”

The crowd began to disperse, and Edwin went back to retrieve his abandoned handcart. It was a strange sensation to come back to such a mundane task as taking shell to sell, after such an upheaval as accidentally rescuing the princess of Ileria from a carriage crash and a fiery fate.

For an utter disaster, that had gone remarkably well.

Edwin emptied his handcart of shell where the yardmaster pointed, and turned to receive his payment. It was only a few coppers, but Edwin took it cheerfully; he was beginning to come back to himself after his earlier ordeal, and all said and done was beginning to feel quite pleased with himself.

Now it was off to the jeweler’s to see about selling that pearl.

Edwin opened his purse without looking and funneled the coins with his hand into its open mouth...and they jingled onto the ground at his feet.

A sudden sense of cold spilled over Edwin as he stared at them scattered on the stones—a sense of cold every bit as strong as when the princess had pointed him out to her guards. Numbly, he reached for his purse again, turning it upside down to look at the bottom. A tear ran through the thick fabric—no doubt the result of catching on some sharp object or scraping along the stone street when he had fallen from the horse.

He braced himself, opened the mouth of the purse as far as it would go, and worked his hand inside.

The pearl was gone.