Grace by Contract (Once Upon a Duchy Book 1) 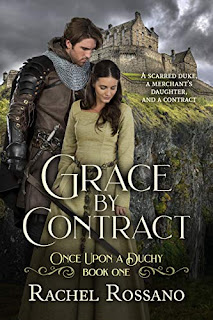 My Rating - 4.5 Stars
I'm always excited when a favorite author ventures into a new subgenre. Venturing into fairytale inspired books beginning with my all time favorite fairytale, Beauty and the Beast? Yes, please!
Grace by Contract is the story of a very different Beast and Beauty from what I usually see in retellings and reimagined takes on the classic tale. To begin with our beast, Silas, is a man left scarred by a tragic event but he's far closer to the gentle Beast of the original fairytale (only without the nightly proposal) than to the usual interpretations of a beastly temper to go with the appearance. I love both versions of the beast, but there's something so sweetly adorkable about Silas who is a little grumbly (all the more understandable since he deals with pain and migraines) but a genuinely caring and gentle protector. His injuries caused by a fire in his past help set the stage for Grace entering his life beyond the role of an indentured servant.
Grace is also not your typical Beauty given the fact she is the eldest sister, not the youngest, and her youngest sister is the one actually named Beauty. She's a force to be reckoned with and one of my favorite examples of quiet strength in a woman who isn't afraid of difficult choices when she needs to find a way out of a bad situation threatening her more vulnerable youngest sister. Her lack of fear or pity toward Silas and his scars is endearing. As is the fact she's not afraid to remind him (and a few other characters) of the "proper manners" expected to be adhered to by nobles toward servants such as herself. I can't help smiling over her gentle but stubborn insistence to certain nobles' chagrin.
I adore this story! Silas and Grace's romance is a wonderful interpretation on seeing beneath the surface and coming together as equal partners despite the challenges of class differences among other things. It is such a swoon-worthy relationship that you just have to cheer. The bad guys are perfectly believable in their roles. Whether it's a bully of a housekeeper or a scheming noble who will no doubt cause future trouble in this series, they are excellent characters. Of course, it's not just Silas and Grace or the bad guys who are this vibrant. I love the side characters ranging from a steward with secrets of his own (and a not so secret loathing of sheep) to Valiant the collie pup! I look forward to seeing how the seeds hinting at future stories will be further developed as the series progresses.
This is a series set in Rossano's already established world involving her Rhynan and Theodoric series. However, Once Upon a Duchy is set in its own corner so it's not necessary to read the other series before launching full speed into this series. It is also a completely non-magical world, which I both love and respect because adapting fairytales without using any magic can be extremely challenging. Rossano has pulled it off phenomenally complete with a sweet swoony romance mixed in with a little mystery and intrigue plus brilliant layered characters and worldbuilding.
Grace and Silas' story has swept me off my feet! I cannot wait for the next entry in the series, Reclaiming Ryda, which is a mashup of Rapunzel with East of the Sun, West of the Moon! It will release later this year.
In celebration of National Fairy Tale Day, tell me your favorite fairytale and retelling! Have you read Grace by Contract yet?
Happy Reading!
Kimberly