We are thrilled to welcome Laura L. Zimmerman to Lands Uncharted today as part of the blog tour celebrating her upcoming new release, Lament! We featured Book One in Laura's Banshee Song Series, Keen, in a review and behind-the-scenes post, and now we're excited to share character spotlights from Lament! I'll share more about the book below, but for now, here's Laura!

In the second book of the Banshee Song Series, Caoine unexpectedly travels to the Unseelie Realm. This opens the door to a whole new cast of characters! While we still get to see a few favorites from Keen, Lament welcomes you to the land of the fae. Let’s get to know a few of the characters!


Aibell: This tough-as-nails faerie is one of the first Caoine will be introduced to once she arrives in the Unseelie Realm. Aibell is wicked with a bow and arrow and just as talented with a sword. The secret to her skill at weaponry lies with a story from her past. How is she connected to King Raghnall and why does she look so familiar to Caoine?

Laoise: (LEE sha) This girl is no ordinary wisp. Laoise stands a solid six feet tall but is always quick to offer a gentle smile. Her silver eyes glow with radiance, making her appear partially transparent. That is, when she’s not changing into a ball of light to zip away and confuse even the most observant. Her closest friend is Killian but she finds a special connection to Caoine that makes her especially protective.

Killian: A tall Light Elf, Killian is technically from the Seelie Realm. He’s downright dangerous with a bow and arrow, and Caoine is thankful he’s on her side, when it comes to helping her escape the Unseelie. His formal elegance often makes him appear as if he’s standing perfectly still, giving off an air of royalty. But what are his roots and why does he prefer to reside in the Winter Realm when it’s not his real home?

Gar: He’s short, he’s a goblin, and he’s always a bit of a grump! His name means “god spear”, which makes sense since he’s oddly good with the spear―beyond good. In fact, he never misses his mark. He looks like a child, if said child could grow a mass of hair with deep wrinkles that reflected a life of worry. Although he doesn’t exactly trust Caoine, he’s committed enough to help her on her journey, even if he never cracks a smile.

Nym: This little man quickly becomes one of Caoine’s closest companions. As a faen, he shouldn’t desire to be around other fae, or a half-human for that matter. But his loyalty is strong and he’d certainly never tell a lie, even if he could. He often disappears without any notice but he somehow appears at just the right time. Caoine learns to keep this odd guy close, especially when she isn’t sure who can be trusted.


Of course, we’ll meet a few more friends along the way, including a surprise character that remains a secret for now. (Shhh!) And our old favorites will be there for you, too!

Thanks for meeting my friends of Lament. I’d love to hear which character is your favorite!

Eeep, I started this book earlier this week and now I'm even more eager to keep reading!! Lament releases on January 26th and can be pre-ordered through Amazon (paperback and e-book) or Barnes & Noble (and after you've pre-ordered, make sure to go HERE to fill out the form for some amazing pre-order swag!) Here's a little more about the book: 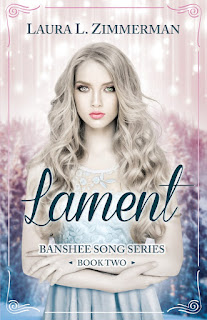 Half-fae banshee, Caoine, is devastated by the loss of her father, and graduation is just around the corner. Ignorant of an old enemy seeking revenge, she is whisked away to the Unseelie Realm where she learns someone dear to her is being held captive. She vows not to go home until he's free.

Then she finds out she's trapped, unable to return to the human realm.

In order to go home, she must set aside old prejudices and work with a nemesis to survive faerie tricks and fae creatures hungry for human blood. Only then will she discover the secret to her escape and her loved one's freedom.

Aided by an unlikely band of fae, she uncovers more about her banshee powers than she dreamed possible, even as the fae remind her just how human she really is.

She'll take the drama of high school over the pettiness of the fae any day.

Make sure to stop by the Online Release Party for Lament next Thursday, January 28th, and check out the other stops on the blog tour (find the full tour schedule HERE)! Thank you so much for visiting today, Laura, and congratulations on your new release!!