Dawn Bringer and Celebrating My Birthday and a Release with a Free Steampunk Novelette! (Lizzie)

So today is supposed to be a Weekend Reads post, and this kinda is, but it's also a shameless self-promo and a birthday bash! In addition to my 37th birthday, today marks the release of Dusk Crier, the fifth and final book in my fun adventure-romance novelette- and novella-length steampunk collection, The Star Clock Chronicles. It's the release of the collection too and a $0.99 sale on my most popular book, Midnight for a Curse, a humorous fairytale retelling of Beauty and the Beast where Beast wants to keep his curse. In lieu of a party with banana pudding and homemade pizza and a hike, which was my childhood birthday hope, I'll just talk books and give away Dawn Bringer, the first book in The Star Clock Chronicles series. 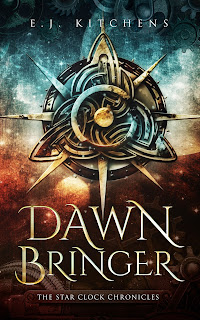 I don't remember when I first heard about steampunk, but I quickly fell in love with the aesthetic of it. Gowns, corsets, airships, goggles, fancy guns. The look is so fun, so promising of adventure, that I couldn't help but write a steampunk series, and include a bit of fae trouble-making too. In the Star Clock Chronicles, we have a world where the sun has been hidden behind a fairy star veil. Stars, dawn, moonlight, all are lovely myths. No moving shadows tell you the time. No stars guide your path. Navigator automatons are the only way to travel more than three miles without a curse befuddling you. Clocks are forbidden. Iron is contraband.

Into this tightly controlled world comes new hope when a brave airship captain and a clever teacher/smuggler find ancient books on navigation in an old fairy cave. If they can escape the cave and the Time Keepers after them, they and the friends they'll go to for help can change the world. Maybe even defeat the Time King and bring back the dawn.

With adventure, banter, and romance, these standalone short stories are delightful, quick reads, even if I do say so myself. ;) If you like steampunk or have been wanting to give if a try, I hope you'll accept a free copy of Dawn Bringer, available here.

In a world where the sun is a myth, dawn is coming.
Bertram Orren expected trouble with both the Time Keepers and faeries if he got caught in the faerie woods. He didn’t expect to get trapped in an abandoned faerie court deep underground while trying to save airship captain Marianna Bowditch from a will-o’-the-wisp. Nor did he expect he and Marianna to discover an ancient treasure that could help free the world from the Time King’s control, one that could bring back the people’s ability to navigate for themselves in a world where sun and moon, east and west are myths hidden by the faerie queen’s Star Veil. Even if Bertram and Marianna escape the caves, they’ve no way to navigate themselves to an airship port and safety, and if the Time Keepers find them, the world will never see the dawn.
Do you read steampunk? How do you celebrate your birthday now?
Posted by Lizzie at 4:00 AM