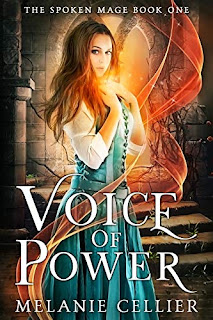 I don’t know about you, but I love series, especially if they’re already complete and I can follow the character journeys from beginning to end, as quickly as my time permits. The Spoken Mage series offers one such experience, with four books in the initial series, one companion book about side characters, and a follow up series (partially released) already available.

The first book, Voice of Power, introduces us to Elena, a girl with an ability believed impossible. Her existence shakes the foundation of the existing mage system in the kingdom of Ardann and earns her many enemies. She's installed in the Royal Academy for mages, and nearly everyone there wants to see her fail. Those who desire her success do so only because they wish to study her and gain an advantage in the exercise of their own powers. Many view her powers as a threat to the kingdom (or conversely, as a weapon to be wielded against their enemies)—and as such, her life is in constant danger.

I appreciated Elena’s devotion to family and her determination to make the best of the difficult situation she landed in. Sometimes her hasty speech and various immaturities felt a bit much, but they were also believable for a teen without guidance in a difficult situation. Elena has ample room to grow as the series continues, both in character and the exercise of her abilities, and thankfully, she takes those opportunities.

I found the general concept of The Spoken Mage world intriguing, with its foundation resting on the power of words, a power so great that those without an innate gift cannot read or write without accidentally unleashing explosive and deadly force. It begs many questions about how a world would function without the written word available to most of society (although certainly for much of our own world’s history, only the upper classes were literate) and provides an interesting exploration of those concepts.

In addition to a fresh world concept, this YA academy series has a slowly unfolding romance and plenty of conflict found in the burgeoning power that Elena must learn to control, an ongoing war with a neighboring nation, and various factions struggling for control within Ardann. The series is an entertaining quick read with nice twists and a satisfying conclusion. I’d especially recommend it for any teens in your life.

Are you a series reader or do you prefer standalone novels?