I tried to think of a Christmas-themed fantasy story for this week's post, but I apparently haven't read any lately! (Last year I posted a review of Christmas Fiction off the Beaten Path, an anthology with a variety of genres - including my fantasy story, "Return to Callidora"- which you can find here!)

Instead, I'm excited to share my thoughts on Burn, the last book in J.M. Hackman's Firebrand Chronicles! Burn released earlier this year, and the full Firebrand Chronicles box set will be published on January 11, 2021! It's even going to include four new stories from the Firebrand Chronicles fantasy world - I can't wait! Since Burn is the third book in the series, a spoiler-free synopsis will be tough, but I'll do my best! 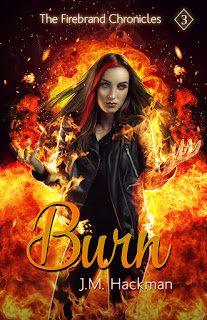 Brenna James is a teenage girl with ADHD whose ordinary life was disrupted when she discovered she has the power to create fire and that part of her heritage comes from Linneah, an alternity where she's the one destined to fulfill an ancient prophecy. After rescuing her mom, recovering a sacred relic, and saving her best friend from a disastrous marriage, Brenna has made a major enemy of Rune, a dangerous man determined to take control of the alternity by force no matter the cost.

Now Brenna and her family have been forced to evacuate their home, and Brenna's boyfriend, Baldwin, has been affected by Rune's dark power. Brenna should be training to improve her skills as a firebrand, but her talent won't respond to her. When a prophecy suggests she might be able to find a staff that has the ability to cut and mend space itself, she finds new purpose but also a new level of danger. And even if she finds the staff, how can she fight Rune and his growing army when her firebrand gift won't cooperate?

As you can probably tell, Burn was an action-packed, thought-provoking finale to the Firebrand Chronicles! I missed Brenna's spunk during the sections when she was feeling lost and discouraged, but her reactions to her circumstances were realistic and made for a stronger journey of growth by the end of the book. As the author discussed in this post, Burn definitely went a little darker than the earlier books in the series, but I appreciated that it was handled tastefully and integrated well into the story. While some of the emotions and themes went darker, there were also many moments of light and hope, especially leading up to the very satisfying conclusion! As always, I had a great time re-visiting this vivid, creative fantasy world and fun characters like Arvandus and Tiny. The conflict felt like it resolved a little quickly considering the enormity of the build-up, but it was interesting to see how everything came together in the end and the roles various characters got to play.

I couldn't wait to read this book after the suspenseful ending to Flare, and I'm so glad I completed this journey! Brenna was a great character to root for even in her hardest moments, and the ending put a smile on my face, making a strong case for the power of light to overcome any darkness. Start with Spark and Flare, then you'll definitely want to see this series to its inspiring conclusion! 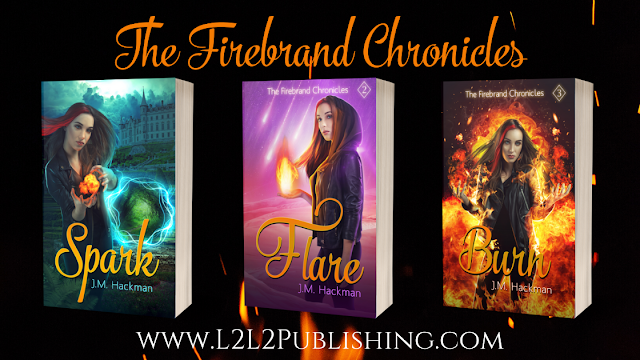 Have you finished any series recently? Were you satisfied with the ending?