We're thrilled to welcome Tabitha Caplinger back to Lands Uncharted! (Tabitha joined us for an interview back in 2018, and we featured her fun, intense, snarky series about demon hunters, The Chronicle of the Three, in this Book Spotlight.) Today, Tabitha is sharing a Story Snippet from her upcoming new release, The Wolf Queen, which comes out in January, 2021!

Eeeep, I can't wait! But instead of going on about it myself, here's Tabitha!

HI! I am so excited to share a snippet of The Wolf Queen with you all. Here’s the synopsis to give you a little context.

Ylva was raised by wolves. That is the story her clan tells of their Wolf Queen. The truth is far more miraculous. Her Gift, bestowed by the Light, enables her to see deep inside the hearts of men.
Prince Rohan considers the Light mere superstition and only believes in what he can see with his own eyes.
But a great evil is infecting the Four Realms. The battle between the Light and the Darkness is no longer bound to human hearts, and words Ylva and Rohan thought were just legend are being whispered again. The dragon is rising. 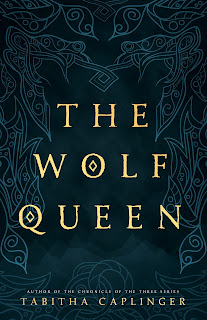 “Aye, it is said there would come a time when the Darkness would rise and it would overcome all men. It will take the High Mountain and be the destruction of us all.” The old man spoke the words with such confidence, as though he had already seen it happen.

Ylva stood up and paced the dirt floor. “You talk of myths and legends. There is nothing on that mountain but ruins.”

“It is not what is on the mountain, but what lies beneath it,” Håkon sighed.

“You don’t really believe that to be true?” Ylva asked incredulously. She had heard him speak of the dragon who slept beneath the mountain a hundred times before. While Håkon based much of his storytelling upon their clan’s history, Ylva knew that this account was not one to be believed. Maybe the myth held the slightest thread of truth, but Ylva had assumed its main purpose came in teaching children what is right and good through means of fable. Yet now he continued rambling into the fire about the mountain and its dragon like it was more, like it was prophecy.

“Do not think me a lunatic, Ylva…” the old man began but was cut off by Erland bursting through the door.

“I am sorry, but there is someone here who says he must speak with you,” Erland said. “He claims it is urgent.”

“At this hour?” Ylva asked. She did not give time for Erland to respond but simply added, “It’s fine, I will meet him.” She turned to Håkon and asked, “Join us?” The old man nodded and they followed Erland outside.

They walked through the village toward the western gate. An Ibharüng guard stood watch at the entrance, a lit torch in hand. Erland held another—the flicker of the two lights now cast a glow upon three figures previously camouflaged by the darkness. Their steeds stood nearby, the horses’ breath visibly escaping as foggy tendrils into the frigid night air.

“I am Ylva, leader of this clan. To whom am I speaking?” she asked.

One of the figures stepped closer, coming into clearer view. His pallid skin and hair looked to be covered in ash and blood. “I am Dagr, of the Fell,” he said and then bowed his head. “We come seeking shelter.”

“You have come a very long way. Why? Shelter from what?” Ylva asked. There were at least three other clans residing in the territory between her clan and the Fell. While no current dispute existed between them, her uncle’s deceit had caused a long-lasting tension.

“Our clan came under attack two days ago,” Dagr answered. “They came at twilight with no warning and no reason except to destroy everything and kill everyone.”

“We do not know—they bore no clan markings. We don't believe them to be from the Northlands,” Dagr replied. “We came here because we know you to be virtuous and just. We know that you can be trusted and would not simply cast us out.”

“If your village was attacked, why are you not helping the survivors? Have they sent you to find a place for them all? To ask me to bear the burden of your entire clan?” Ylva asked only a few of the questions running through her mind. It bothered her to consider that an injured people were left without help. She herself would not have left them out in the cold. At the same time, she would not extend the Ibharüng's help simply because the Fell may believe Ylva’s people owed service to them. No—her clan’s debt had been paid years ago.

“We are the survivors,” another of the Fell said as she stepped forward, a shield maiden with long hair stained with the same blood and ash as her comrade, “the only survivors.”

“This is Solveig, my sister,” Dagr said, “and this is Bjorn.” He gestured to the third Fell, a young man of ruddy appearance.

Bjorn looked terrified as blood actively dripped down his arm. “We are all that is left of the Fell. No other man, woman, or child remains alive. All that remains of our village is soot and smoke.”

“Why would someone do such a thing?” Erland wondered aloud. “This goes beyond the rules of war.” Erland had fought by Ylva’s side since she was a girl. He usually spoke very little. While typically calm and steadfast, worry now wrinkled his brow.

“There was no rule to it, no law guiding it. It was pure evil wearing men’s skin.” Solveig’s voice trembled as she spoke, tears streaking her face.

“What do you mean?” Håkon asked, now stepping into the conversation to which he had just been a silent bystander up to this point.

“They were unnatural, the men who attacked us. Their eyes were the color of storm clouds, their veins black. Each possessed the strength of ten men,” Bjorn replied. His voice cracked with each word.

Dagr placed a hand on the boy’s shoulder. “They were inhuman. It was like they were from another world.”

Ylva sighed. “We will give you shelter. Erland will see to it. But be careful not to make monsters out of mortals. It will only incite more fear,” she said. She looked to Erland who nodded his compliance and began to lead the three Fell survivors into the village.

“Sometimes mortals become monsters,” Håkon scolded her quietly once the others left earshot. “There is more at work here than the hands of men. Do you really have such a hard time believing that?”

“I believe in the Darkness, but this…this is…” Ylva was finding it difficult to wrap her mind around such a thing.

“This is the Darkness growing stronger,” the elder interrupted. “Just as Lys can bestow gifts of power on his beloved, Myrkr can also give a form of power that is really a curse. The former acts to bless and strengthen while the latter only seeks to take. You of all people should understand there is more at play here than just the natural. Think of your own gift… your Sight.”

Håkon was right. Ylva knew it. Lys had given her a gift—one that could not be explained. Some even doubted it, but she knew it to be as real as anything she could touch with her hands. What Dagr had seen, the darkness taking over a man's heart, was what she saw every time she used her Sight. But she had never known it to break the surface of a man’s flesh to become visible by all. She couldn’t fathom a darkness growing so strong in a man’s heart that it would breech his form and will completely.

This all meant more than Ylva was prepared to accept. The dying man, the elder’s stories, and now the catastrophe upon the Fell…the Darkness must be growing. This attack perhaps marked only the beginning. “What do we do?” she asked.

“We send a falcon to the North Keep,” Håkon instructed. “The dragon is rising.” It was the second time Ylva had heard those words. It was the second time they caused her body to shiver and draw bumps across her pale skin. For most of her life, Håkon told tales of Myrkr and Lys. He spoke of imprisoning the Darkness generations ago and of a time when it would once again come to reign. He recited prognostications of The Priestess turning the hearts of men and her dragon devouring those who would not yield. Did she not believe him? It is easy to believe what we can see and experience, but it is harder to bear faith in the things unseen—the things that defy rational thought. Believing solely in her gift, what she could see, was simply not enough anymore. She must decide: embrace the stories told by the elders or find another option. She could no longer avoid thinking about from where her gift came and the implications therein. If Håkon was right, if his stories were actually coming to pass, she must broaden her belief. Ylva wanted to believe fully in Lys; that Lys could be trusted both with what can be understood and what cannot. The war between the Light and the Darkness breeched the surface of their world and so her faith must go beyond the shallows. Her heart had to be ready.
Doesn't this sound fantastic?! Here's a little more about the author: 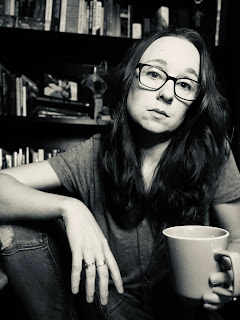 Tabitha Caplinger gets way too emotionally invested in the lives of fictional characters, whether it’s obsessing over a book or tv show, or getting lost creating her own worlds. Tabitha is the author of The Chronicle of the Three Trilogy, a Christian urban fantasy, and a lover of good stories and helping others live chosen. When she’s not writing book words, she’s reheating her coffee, binging a new show or teaching God’s Word to students. Tabitha, her husband and two beautifully sassy daughters desire to be Jesus with skin on for those around them. They live to love others...and for Marvel movies.
You can connect with Tabitha on her website, Facebook, Instagram, Twitter, Pinterest, and Goodreads.
Thank you so much for joining us today, Tabitha!! Congratulations on your upcoming new book!
Posted by Laurie Lucking at 4:00 AM