Hi everyone, I'm excited to share a first look at my newest release, Unseelie Uncollared, the first book in my new epic romantic fantasy trilogy!

Unseelie Uncollared is set in the same world as Love's Enchanted Tales, my fairytale retelling series. However, this trilogy ventures into a brand new corner of Sonera including a new continent featuring some heavy Greco-Roman inspiration. I've loved expanding into the areas beyond the Five Kingdoms since I get to feature more of the gargoyles who protect the city-states to the east of the Five Kingdoms and of course the new cultures of Hellada including the Unseelie.

Now I'm happy to share a snippet from the opening scene of Unseelie Uncollared. Enjoy! 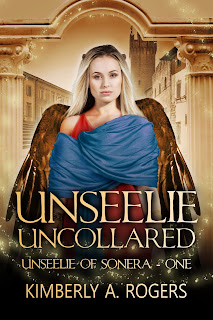 Her past is a mystery.Protecting the children is her duty.Her future could destroy everything she loves.Tatiana has no people and no past before she became a companion and nurse to a noble family for five generations. She knows only that her feathered wings make her different, neither human nor gargoyle. When her young charges are orphaned, Tati escorts them across the sea to their father's homeland. In a strange new city, she finds others like her and the chance to uncover her own past but pursuing it risks losing the children she loves.Ramessu has spent his life serving the human rulers of the port city of Chaon. A servitude threatening to destroy his people. With their females collared, unable to fly or use magic, the Unseelie are slaves and they are dying. When an uncollared adult female arrives in the city, Ra knows she could change everything...or tear their people apart.

Tatiana blew out a breath even as she swept her wings down in an effort to put more distance between herself and her pursuers. Gargoyles were rather stubborn about these chases. The wind’s sharp bite stung her cheeks and whipped her pale blonde hair out of her face. Thank goodness she’d had the sense to change into the same flying leathers the gargoyle watchers favored. Even the sleek design of her best dresses would have slowed her down in comparison to them.

A shadow appeared beneath her and she swept her wings down twice in rapid succession, forcing herself into the thicker clouds. They cast the world into a cool greyish mist before she burst through the top of the cloud bank and into clear sky once again. Shifting her body to swing her legs down into a more upright position, Tatiana gave one last downward sweep of her wings to rise into the path of a sunbeam. The air was still cool, but the pale light of the rising sun promised to bring warmth to the day.

For a moment she hovered, eyes closed and chin raised, as she spread her wings and arms wide. She inhaled deeply. This was why she loved flying.

She swept around, neatly dodging a near collision with Aser. The ten-year-old gargoyle was not quite as skilled at mid-flight halts and hovers as he would be when he was older. Tatiana raised an eyebrow at him. “Where are the others? I know more than just you were chasing me today.”

Aser’s grin was mischievously wicked even as he frantically beat his leather wings to keep himself in place. He puffed his chest out as he ran a hand through his tousled teak-brown hair, exposing his pointed ears. He looked very much like his father, the annoying creature. “We got you, Tati!”

Tatiana swept her wings down and launched herself into a forward spring, soaring over Aser’s head just as a far larger gargoyle burst through the cloud bank with arms outstretched for a grab. She tucked her wings in close, rolling to avoid a second gargoyle who shrieked with glee when she almost managed to grab Tatiana’s boot. Banking sharply to the left allowed her to avoid two more adults emerging from the clouds. However, one was still missing. She banked to the right and then darted up. Hands latched around her left ankle, and a jubilant cry pierced the air. “I got her! Osee! Osee, I got her! Aser, Chloe, I got Tati!”

Tatiana laughed as she glanced down at the boy still clinging to her left ankle. Elias was not quite ten months younger than his cohorts but when he was the first to win the game of Fly Away, he certainly graced everyone within hearing with the knowledge. She smiled when he glanced up at her with pride beaming from his face. “Well done, Elias.”

Elias gave a whoop as he finally released Tatiana’s boot in favor of gliding toward his age mates who were busy circling Osee. All clamoring for another game. Osee cast her a pleading look, and she merely held up her hands in silent denial. He grimaced as though she had done him a great disservice. As though he were not Aser’s father and, therefore, the adult most responsible for minding the children on their morning flights. Chloe was his niece as well, which meant he had double the responsibility. And more importantly, with his tendency for pranks, she was not inclined to help him further. Not yet, at least.

Dina flew closer to hover next to Tatiana, her rich brown hair taking on an almost honey hue in the dawn’s light. She grinned when Osee turned his pleading gaze to her. Her soft soprano carried through the children’s chatter as she mused, “I think you should help the children play Formation Catch. It will be good practice, won’t it, Osee?”

Tatiana smothered her laughter as the children crowed with delight, and Aser flew into his father’s torso causing the older gargoyle to grunt as he nearly overcorrected. A flash of light drew her attention to the thick ring of burnished silver adorned with an open eye circling Osee’s left bicep and marking him as one of the Watchers, gargoyle protectors of the great city-states. Osee’s pretend scowl when he noticed her amusement didn’t ruffle her. They had known each other far too long for that to ever work.

When Osee scowled a little harder, she made a shooing motion with her fingers. “Go on now. We wouldn’t want to miss the grand display by Watcher Osee, would we, Dina?”

Osee flew a small distance with the children while digging in the bag at his waist to fetch the ribbon ring used to practice handoffs mid-flight. The bright green and yellow ribbons fluttered in the wind to add a visual aid to the practice. Making it easier for younger fliers to develop their reflexes. The ribbons would grow more subtle and eventually be removed by the time they were ready to compete in the Watchers’ recruitment trials. For now, however, it made for a delightful game as the children’s gleeful shouts attested.