Happy Friday! I hope your week has gone well and the weather is (hopefully!) starting to get a bit cooler! Who else is ready for fall? I know I am!

Well, if it is still hot where you're at, let's just pretend it's cold and snuggle up with a nice blanket and a fun book!

I've recently had the pleasure of reading Keen by Laura L. Zimmerman. Here's what it's about:

Half-faerie Caoine has no control over the banshee lament she sings each night, predicting the death of others. A senior in a brand new high school, she expects the same response she's received at every other school: judgment from fellow students over her unusual eyes and unnaturally white skin and hair. However, when Caoine arrives at West Lincoln High, for the first time in her life she finds friends. Real friends.But being a teenager is never easy, especially when the star soccer player, Oliver, sets his sights on her. Allowing him to get close means revealing her curse to the human world. She can't let that happen.Life spins further out of control when her lament comes out during the day, those whose death she predicts die right in front of her, and a dark faerie known only as the Unseelie prince blames Caoine by leaving her the creepiest notes ever. Her curse is notsupposed to work like that.In a race against time, Caoine must uncover the Unseelie prince's identity and stop a spell before it unleashes hell on earth, all while trying to control her banshee song and finding a place among her peers.Senior year just got real. 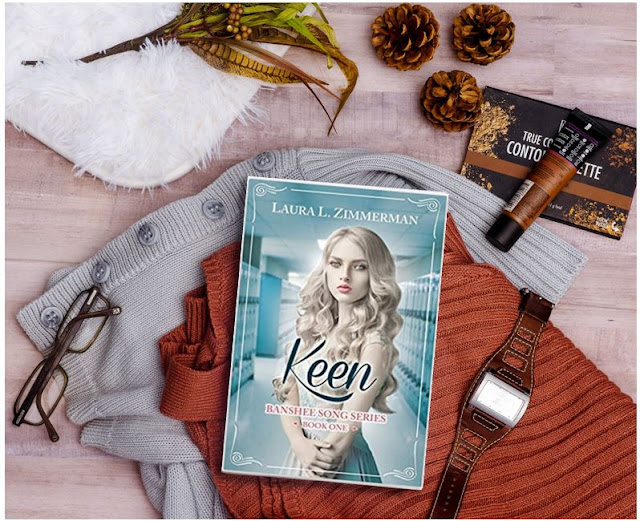 Before I read Keen, I couldn't remember the last time I had read a book in a high school setting. I was so glad I picked this one up because it was such a fun read! There were faeries, friends, drama, love, humor, and excitement all bundled together.

Zimmerman does a great job of making characters relatable for the teen genre and others who are older than teens, but still love Young Adult books (me :-D). I enjoyed the healthy relationships included in Keen from Caione and her father to Caione and Oliver.

Overall, this is an enjoyable and fun read to add to your TBR pile!