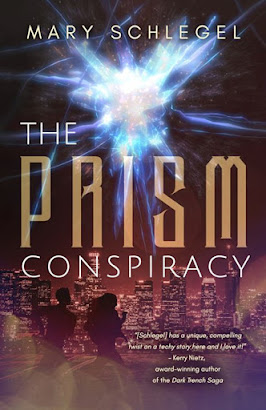 An incredible job. An exasperating android. An all-too-human secret.

Fresh out of art school, Abigail Huntley gets the chance of a lifetime working for Sphinx Architecture. Her remarkable talent has also landed her a remarkable work partner: a cutting-edge android named Rory, who appears so completely human that Abigail struggles to remember he's just a machine. If only his stiff interactions and coldly logical approach to everything didn't stifle her creativity.

But as time goes by, Rory shows subtle changes in his behavior, making Abigail wonder if he has achieved self-awareness. Despite her reservations, she finds herself warming to him, even attracted to him. Then an accident crashes Rory's programming-and leaves him bleeding, with human memories of a medical experiment inflicted by the mysterious organization, PRISM.

And now, here's the sneak peak from the book itself:

After extensive research, Abigail had decided on Dragonfire Grill for dinner. An upscale, East-meets-West establishment, it came with dozens of rave reviews to recommend it. She had made a reservation that morning, and when she and Rory left her car and headed towards the doors, she was glad she had, as there was already a line stretching a good distance down the sidewalk.

A waitress seated them and provided them with glasses of water, menus, and a wine list, then returned a few minutes later to take their orders before disappearing again.

“So,” Abigail said, taking a sip of water, “what are you thinking about, Rory? Or should I say processing?”

“I am thinking about the ugly duckling.”

“Really? What part of it are you thinking about?”

“I am thinking about the meaning you find in the story—about the truth and the lesson that you see. Please correct me if I am wrong, but I think you perceive the story to mean that a conclusion regarding an outcome should not be drawn based on the early stages of an incomplete process, if not all of the potential variables in the equation are known. Am I correct?”

Rory repeated it while Abigail lined the pieces up one by one in her head and sorted through them.

“Okay, I think…I think that makes sense,” she said. “Yes, that’s what the story means.” As she said it, though, it dawned on her that Rory’s programming shouldn’t have allowed him to draw such a conclusion. A mindless piece of software running purely on protocols and code should not have been capable of the abstract thought required to apply the message of the story to the real world. How had he done that? Was it just coincidence? Or was she underestimating Rory’s true capacity for learning?

“I have enjoyed spending the day with you today, Abigail,” Rory said.

Abigail shook herself out of her train of thought. “What?”

“I have enjoyed spending today with you.”

Abigail started to smile, but she was confused. “But…but what does that mean—you ‘enjoyed’ it? Does that just mean it does something good for your programming, or…or what?”

Rory stared at her with the same look he’d had on his face in the park, that look of being just at the edge of feeling something. Abigail found herself unconsciously leaning forward, staring back with equal intensity.

“I…I am…” His expression was strained—almost like he was in pain. “I am having…difficulty…processing that question.”

“Try breaking it into smaller pieces,” Abigail said. “That’s what I do when I get overwhelmed.”

There was a long silence. “I do not understand.”

“Then let’s just try something different. Look at your shirt—you’re wearing your favorite color. Have you ever done that before?”

Rory looked down at his sleeve. “No. I have never worn purple before.”

“Does wearing that feel any different than wearing the blue you usually wear? Or, does it make you think anything different? Send a different message to your programming?”

The look in Rory’s eyes deepened, as though he was searching the very deepest parts of his mind for something.

Abigail waited for him to go on, but he didn’t. “Rory?”

He raised his eyes to hers, and he was actually frowning now. “Why do I like purple?”

“I…I don’t know,” Abigail said. “I asked you that, remember? You said you didn’t have access to that information.”

“But there has to be a reason. My programming is designed to form preferences from highly detailed algorithms…and yet I cannot locate the algorithm process that created my preference for the color purple in my files.”

Abigail narrowed her eyes as she tried to follow his train of thought. He couldn’t locate the algorithm that had created his preference for purple…but what about the algorithms behind the other preferences that he hadn’t been able to explain to her?

“Who is your favorite scientist, Rory?”

Another long silence. Then, “I cannot find that algorithm either.”

“And your favorite song?”

“How about that algorithm?”

Silence. “I cannot find it.”

“Well, is it—I mean, I don’t know much about how programming and stuff works, but—but is it possible that your programmers just gave you preferences like that with no real reason? Like, maybe the programmer admired Stephen Hawking, so he made him your favorite too, with no real reason, no algorithm, behind it.”

“That is not possible.”

“Because there are extensive regulations that PRISM programmers are required to follow, one of which is that they are not allowed to impart any of their own personality to an artificial intelligence of any form. Arbitrarily granting preferences to an android is strictly prohibited.”

“So, either someone at PRISM did some big-time rule breaking, or…” Abigail trailed off and watched Rory, hoping that maybe he could fill in some other option she couldn’t think of.

“My system must have spontaneously deleted the files,” he said. “It must have happened before the last time my programmers defragmented my software, but I have not found any evidence of such a glitch in any of my diagnostic scans.”

At the word “glitch,” Abigail suddenly remembered all of the “glitches” that Rory had had over the last week, when he just sat or stood there, frozen. He never seemed to have any memory of those incidents. Was it possible that he had some kind of severe glitch or virus that was randomly deleting files from his brain, and erasing his memory with them? He was a prototype, after all, the first of his kind to be introduced into human society as a free agent. There were bound to be a few bugs in his system.

“Maybe…” She didn’t want to overreact or worry him without reason, but that did seem kind of serious. “Maybe the next time your programmers do that defragmenting thing, you should talk to them about it.”

“If I have not been able to locate the files before then, I certainly will.”

And then came the awkward silence. Abigail groaned inwardly. She had hoped maybe they were getting past having those. But then, of course, how in the world were they supposed to follow up a conversation like that?

“I have made you uncomfortable,” Rory said.

Abigail looked at him, startled. “What?”

“You are uncomfortable,” he repeated. “I am sorry.”

“No, no, don’t apologize, it’s…it’s not that I’m uncomfortable, it’s just…I just don’t quite know what to say next.”

“You should tell me about something you like,” Rory said.

Abigail reached for her glass and took another sip of water. “And why is that?”

“Because when you talk about things you care about, you smile.”

She lowered her glass to the table slowly. “You do?”

She wrapped her fingers around the glass’s stem and squeezed, knowing she shouldn’t ask but unable to resist the temptation. “And…is that algorithm missing too?”

Abigail felt like her face was about to explode from blushing so much, but she still snickered a little at that last one. “You like the fact that I’m illogical and irrational? That doesn’t drive you crazy or mess up your algorithms or something?”

Rory shook his head. “No, as I said, it challenges me. I believe you have shown me the truth that is at the core of what it means to be human.”

“And…” Abigail’s voice quivered as she spoke. “And what is that truth?”

“Freedom. You are free to be illogical. You are free to make decisions based on feelings and sensations and emotions rather than merely on protocols and algorithms and programming and facts.”

“Yes, Abigail, that is a good thing.”

Abigail stared at him, wide-eyed, unable to move. He had smiled. He had smiled! In the entire week she’d known him she had never seen him smile before—ever. Seeing it now for the first time sent warmth swirling around her heart, and she found herself instinctively reaching across the table for his hand…

And suddenly she realized that she had feelings for him.

She jerked her hand back, barely noticing as her water glass shattered on the floor beside their table.

What have I done?!

I want to keep reading...what about you? The PRISM Conspiracy releases September 22, 2020, but if you enjoyed this excerpt, you can pre-order now.