I occasionally read out of my normal genres, and a recent excursion brought me to the hard science fiction novel Random Walk (Fractured Galaxy Book 1) by Rachel Lulich. I would classify the read as a very thrilling and enjoyable trip. One clear out of the solar system. :) Basically, it's a modern day Apollo 13 with a black hole instead of the dark side of the moon. Enough said, right? 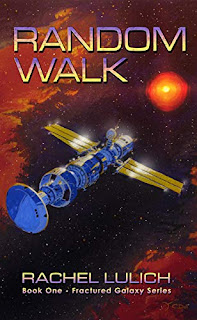 Random Walk tells the story of three US Air Force Space Command astronauts, Derek Williams, Jacob Mendez, and Vicky Abrams, as they test an experimental engine on a flight to Mars. Things go wrong, of course, and they travel much farther than they thought possible, or wanted to go.

The book started a little slow for me, but then I wasn't used to hard science fiction, but once I got used to all the detail, I began to enjoy it. The research was spectacular, and I feel like I know what it's really like to be an astronaut or to be in mission control (this part really made me think of Apollo 13 and Hidden Figures).

I wanted to be an astronaut when I was a kid, and have always been a science nerd, so I enjoyed the realism and science of it. I also like the diverse array of characters, the clever solutions, the awe of being in space. There was tension with the troubles they found themselves in, a realistic amount of interpersonal getting-on-one-another's-nerves (which we can all relate to, especially during quarantine) but nothing overly dramatic, and some exciting danger. I don't want to say too much so I don't spoil anything, but I've very much looking forward to the next book.

If you like hard science fiction or want to branch out and read something different, check out Random Walk (Fractured Galaxy Book 1) by Rachel Lulich.
Posted by Lizzie at 4:00 AM