Weekend Reads (Katie): Until June and the TBR Pile

Until June by Barbara Britton

Hi fellow explorers (of Lands Uncharted...get it? No? Oh. Sure. Let's move on...)! Today I want to talk about the book I just finished reading as well as two books on my TBR pile that I'm about to start (yes, I sometimes read more than one book at a time). 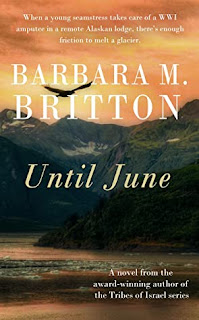 When seventeen-year-old seamstress, Josephine Nimetz, agrees to take care of a WWI amputee in a remote Alaskan lodge, there's enough friction to melt the Mendenhall Glacier. Her position is only until June, and it pays well enough to overlook the hardship of managing a rustic home and a shell-shocked veteran.Geoff Chambers makes it clear that he isn't too fond of the runt sent to take care of his needs, nor of her painful mistakes. Dealing with a depressed and addicted veteran pushes Josephine to the brink of leaving, if not for the money her salary brings.But Josephine is a perfectionist, determined to get Geoff back on his feet—figuratively...Although, sending a rich, handsome veteran back into society may cost Josephine the man she has grown to love.

I absolutely loved this book! When I first read the description , I was immediately interested for the mere fact that it's set in Alaska and my family happens to have a trip booked there in 2021.
Within the first couple pages, though, I knew I had made a good choice in picking up this book, and by the halfway point I was hopelessly devoted and couldn't put it down.The story is beautiful. The characters are real, and their problems are real--but the entire story is handled with such HOPE. I loved it, start to finish.Until June gets two big thumbs up from me.

You can find it on Goodreads here!

On To the TBR Pile!

The Story Peddler by Lindsay Franklin

This book isn't new, but it's one I've wanted to read for a long time and haven't gotten around to it. So, I'm excited to dive in!

Tanwen doesn’t just tell stories—she weaves them into crystallized sculptures that sell for more than a few bits. But the only way to escape the control of her cruel mentor and claw her way from poverty is to set her sights on something grander: becoming Royal Storyteller to the king.During her final story peddling tour, a tale of treason spills from her hands, threatening the king himself. Tanwen goes from peddler to prey as the king’s guard hunts her down . . . and they’re not known for their mercy. As Tanwen flees for her life, she unearths long-buried secrets and discovers she’s not the only outlaw in the empire. There’s a rebel group of weavers . . . and they’re after her too.

I've been reading lots of H.L. Burke books lately (and loving them!). I've already started into this one and I can't wait to keep going! Here's a little more about it:

An estranged son. An adopted heir. A magical attack that forces them to work together.The disappearance of Auric Spellsmith’s mother has strained his relationship with his father to the breaking point. Now, after five years away at the Magicians’ Academy, Auric returns home, determined to prove himself to his father and claim his birthright.Apprentice Jericho Carver has held Spellsmith Manor together in Auric’s absence. Now his master’s son is back, and if he can’t get rid of Auric, Jericho will forfeit his career and lose all hope of wooing the master’s enchanting daughter.Neither man intends to back down.But then Master Spellsmith vanishes into the mysterious Fey Lands. With Fey magic threatening the mortal realm, Auric and Jericho must work together to save the man they both see as father.

So, what about you? Have you read any of these books? What have you been reading?