Happy Friday! I hope everyone is doing well with the new normal and that spring has sprung where you live!

I have three amazing new releases to share with you all today!

The first is Winter Spell by Claire M. Banschbach. This delightful read is book three in The Faeries of Myrinus series. Though it is the third in the series, it can be read as a standalone. I had the pleasure of reading an Advanced Reader Copy of Winter Spell and I loved it! It had the perfect blend of friendship, adventure, and magic. 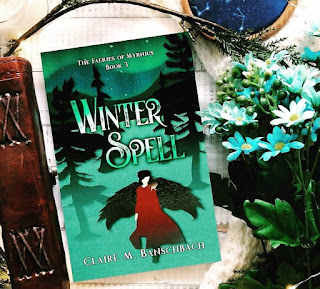 Here's what it's about: A half-breed faery. A war-weary princess. A quest to free three kingdoms from the deadly winter spell.Constantly doubted by her ocean faery kindred, Tonya Freyr-dottir only wants to untangle the dormant ice and water magic within her. Then a strange attack makes her unleash a fierce winter on the land and sea. And she has no idea how to stop it.Princess Diane serves faithfully at her brother’s side, trying to restore their kingdom of Myrnius after the devastating Dark War. Now with brutal winter wreaking havoc, everything they have worked for might be lost to famine and destruction.Desperate to help, Tonya travels to the far north to unlock her magic, aided by Diane, as well as two land faeries: Dorian, a reckless healer and August, a mischievous warrior. But the north brings fresh dangers, unearths old wounds, and offers more questions than answers.With doom threatening human and faery alike, Tonya must find a way to trust her new friends and release her magic before all fall to the fury of winter’s spell.Buy now and enjoy a fairy tale adventure with friendship, danger, overcoming adversity, and even a hint of romance.

Winter Spell was released on April 23. Click here to buy it on Amazon!

The next awesome new release is Legend of the Storm Sneezer (The Stormwatch Diaries Book 1) by Kristiana Sfirlea. LotSS is so much fun to read! I fell in love with Rose and Marek the instant I read about them! This middle grade story is packed with goofiness, great stories, and funny quips you'll enjoy! 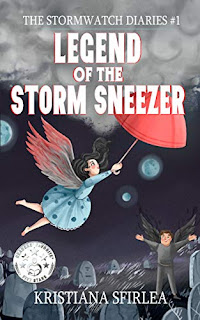 Here's what it's about: Legend Seeker. Part-time Ghost Hunter. Time Traveler.
Thirteen-year-old Rose Skylar sneezed a magical storm cloud at birth, and it’s followed her around ever since. But when Stormy causes one too many public disasters, Rose is taken to Heartstone, an asylum for unstable magic. Its location? The heart of a haunted forest whose trees have mysteriously turned to stone.They say the ghosts are bound to the woods … then why does Rose see them drifting outside the windows at night? And why is there a graveyard on the grounds filled with empty graves? Guided by her future selves via time traveling letters, Rose and Marek—best friend and potential figment of her imagination—must solve the mystery of the specters and the stone trees before the ghosts unleash a legendary enemy that will make their own spooks look like a couple of holey bed sheets and destroy Heartstone Asylum.Letters from the future are piling up. Rose can’t save Heartstone herself. However, five of herselves, a magical storm cloud, and a guardian angel who might very well be imaginary? Now that’s a silver lining.But will they find what killed the ghosts before what killed the ghosts finds them?

Legend of the Storm Sneezer releases on May 5! Preorder it here!

The final new release is Prince of Shadow and Ash (The Mercenary and Mage Book 1) by Selina R. Gonzalez. This book stole my heart! Regulus and Adelaide are absolutely adorable and my new favorite book couple. If you love A Knight's Tale, Pride & Prejudice, and The Hobbit, definitely check out this book! 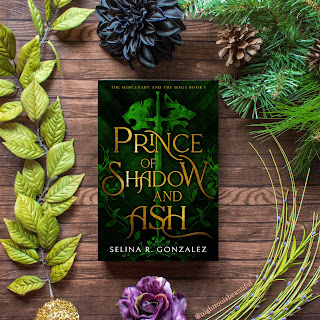 Here's what it's about: She could be his light... If his darkness doesn’t destroy them both.
Bastard and former mercenary Lord Regulus Hargreaves just wants to earn his freedom from the sorcerer who enslaved him. When Lady Adelaide sees past his scar and his shadowed past, Regulus’ dying hope rekindles. But will loving Adelaide while serving the Prince of Shadow and Ash put her in danger?Adelaide Belanger longs to use the magical energy within her, but revealing her power could get her killed. When she meets kind and rugged Regulus, she wonders if she has finally found someone to trust with her secret—and her heart.Regulus and Adelaide struggle to build a relationship and keep their secrets from those who would harm them. By the time their secrets are revealed, it may be too late for them both...

Prince of Shadow and Ash releases on May 13! Preorder it here!

I hope you have a chance to enjoy some of these awesome books! :)
Posted by V. Romas Burton at 4:00 AM