Weekend Reads - The Butterfly and the Violin 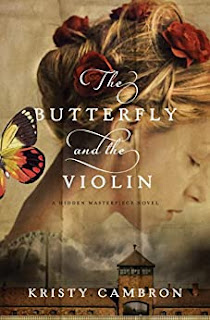 I love historical fiction, the Gilded Age and Edwardian eras are some of my favorites as are WWII stories. WWII is the time period for The Butterfly and the Violin. It's also a contemporary story. The alternating story lines move the book along even faster than if this were the contemporary romance of art historian Sera James and the wealthy William Hanover or the story of Adele, a talented violinist and the daughter of an Austrian aristocrat who is a Nazi sympathizer and her secret romance with a fellow musician.

Adele's story is the centerpiece. Betrayed by her own family for helping Jews, she's sent to Auschwitz where she's forced to play music for the SS officers. Although, she's a prisoner, she's treated better than most of the the other inmates.

Sera's story is about a painting of a woman playing the violin in Auschwitz. She knows is a copy because she saw the original in Paris as a young girl. Her search for the painting leads her to William Hanover who is in the midst of settling his late grandfather's estate. The two start out as suspicious of each other but grow closer in their quest to find the original painting.

It's a good, clean Christian romance. The concentration camp scenes are gritty but not gratuitous and because of Adele's situation not nearly as graphic or horrifying as other books set in concentration camps.

What I loved about this book was that Adele's story and her connection to William and Sera wasn't predictable. I recommend this book to anyone who enjoys historical fiction, especially WWII era.
Posted by Gretchen E.K. Engel at 12:00 PM