Last weekend I went from football mom to soccer mom. My son traded his pads for a keeper jersey and filled in on a local travel team. I was so excited. Not only would we get to watch him play soccer again, we got to cheer with fellow soccer parents, who happen to be some of our closest friends. Oh, the tournament was in Tucson, so 70F in February. Sorry, not sorry for those of you in the Groundhog's shadow. I live in the mountainous, cold part of Arizona, so it was a treat for our family.

What is the best way to pass a car ride that includes hairpin curves through a canyon?

Listing to an audiobook of course! 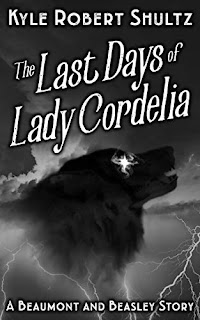 The Last Days of Lady Cordelia by Kyle Robert Shultz is a great choice for a quick listen. The novella is a sequel to The Beast of Talesend and occurs between Book 2, The Tomb of the Sea Witch, and Book 3 The Stroke of Eleven.

What did I like about The Last Days of Lady Cordelia?
1. It's a gaslamp story set in the Roaring '20s
2. There's a good dose of humor
3. It's nice and twisty

Lady Cordelia has magic ability that accidentally turned private detective and magic skeptic, Nick Beaseley into a beast in The Beast of Talesend. Since then, the two along have been looking for a cure for Nick's "condition."
Cordelia finds herself dying in a hospital. But there's something not quite right about this world. Some things are better, and other things are worse, much worse. Like there is no magic in this world. It means that her father isn't a diabolical magician. It also means she and the fully human Nick have never met until they encounter each other in the hospital. The worst part is that in a world without magic, Cordelia doesn't have any powers, and she strongly suspects magic is what she needs to escape.
The story twists and turns with the reader not sure if her memories of a world with magic are the reality or if this unmagical world, that is suspiciously like our world with places named America and London is reality.
While the reader knows what "reality" is, the story is not predictable.
If you've read The Beast of Talesend and The Tomb of the Sea Witch, I recommend giving The Last Days of Lady Cordelia a read (or listen). And if you haven't, check out Lizzie's  January 3 Weekend Reads for reviews of Books 1 and 2 to get started on this magically humorous series.
Posted by Gretchen E.K. Engel at 4:00 AM