Choosing snippets of a story to share before publication always puts butterflies in my stomach. Which snippet should I choose? Will people judge it unfairly without the full context of the story? What if I choose the wrong snippet?! I worry too much, I know.

Today I'm sharing an excerpt from my upcoming novel, The Rebel Princess. This is book 2 in my princess series, and I absolutely loved writing it. I don't have a publication date yet, but all edits have been turned in to my editor at Pelican Book Group, and I hope to hear soon. Don't worry, you'll all be the first to know! 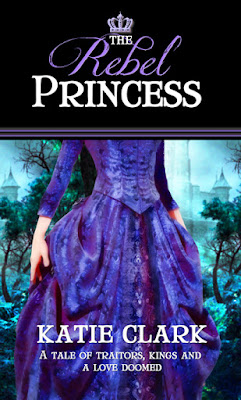 Merry Stern gripped the envelope as the auto approached the palace in Chester’s Wake. Fog filled the air—fog or smog, she wasn’t sure which. It was nothing like the clean, open air in the Dawson’s Edge countryside. She recognized the landmarks throughout the city as she passed—a large fountain outside the city’s huge cathedral, the palace on the riverfront, and most notable the various Rejected homes. She’d never seen such homes before her first visit to Chester’s Wake a few months ago.
That visit seemed so far away now, like a dream.

Unease crept into her stomach as the auto drew closer to the palace gates. It twisted and fluttered, and she took a calming breath to steady herself. Laying the envelope aside for a moment, she pulled a handkerchief from her bag and wiped her sweaty hands on it. She touched her blonde hair, which had been coiled into an elegant knot at the nape of her neck, and she smoothed her plain brown skirt and white blouse. Everything was in place.

She shouldn’t be so nervous. Chester’s Wake had approached her, not the other way around. They’d offered her asylum in exchange for information. Wanted to use her to infiltrate the rest of the rebels within Dawson’s Edge. Make her a spy against her own people. Against Papa.

She had never been a spy before, but she had been deceptive plenty of times.

She bit her bottom lip and stared straight ahead. A moment passed and her teeth released the delicate skin insider her lip. She straightened her shoulders. She could do this. Would do this.

Papa would not rot in prison because she’d foolishly trusted Roanna Hamilton, the exuberant and charming princess from Chester’s Wake. Or rather, Roanna Dawson, the lost princess from Dawson’s Edge.

The thought gave her another moment’s pause, and she almost returned to gnawing her lip, but she refrained.

The auto pulled to the front of the palace and an armed guard met them. The sight of the weapon at his hip made her heart skip a beat. Asylum or not, she was barely more than a prisoner here. She was a Dawsonian rebel. It seemed fitting that the one to greet her should be an armed guard.

A moment passed and another figure stepped from the castle—Queen Charlotte Hamilton. They’d been friendly when Merry visited months ago. Of course, that was before anyone had known she was a rebel.

Queen Charlotte smiled as Merry climbed from the auto. She took Merry’s hand and pulled her close. “So nice to see you again, Lady Merry.” She kissed Merry’s cheek.

Heat burned under Merry’s skin. Why was Queen Charlotte being so friendly? She wasn’t sure what to feel or expect at this point. She’d been wrong enough lately, hadn’t she?

“It’s nice to see you again as well, Your Highness. Thank you for hosting me.”

Hosting me. As if she were a legitimate guest.

But Queen Charlotte only smiled sweetly. “You are most welcome. Please, come in and I’ll show you to your rooms.”

Merry had half expected to be forced to bunk with the servants, or to have a room in the dungeon. But the queen led her up the grand central staircase and to the right, toward the guest wing.

Merry marveled once again as they maneuvered through the palace, much as she had marveled on her first visit. The royal residence was so open and light, not like the dimly lit halls of the Dawsonian palace in Dawson’s Edge. Here in Chester’s Wake, windows lined the walls, and electric lighting illuminated every nook and cranny.

They climbed a smaller staircase, and a moment later, Queen Charlotte led her through a doorway.
Not only did Merry have her own room, she had a suite of rooms. Odd, considering not six weeks ago she’d been arrested for treason in her own country, caught by Queen Charlotte’s own daughter. Or the girl Queen Charlotte thought was her daughter.

Merry sighed inwardly. The whole situation was too bizarre and confusing.

“Quite.” Merry took in the sitting room, dressing room, and bedroom. “In fact, I worry this is much too grand for me.”

“Nonsense. You are our guest here. You may rest for the remainder of the day, and tomorrow, you will begin working with me in my offices.”

“Your offices?” This was quite a surprise. She’d imagined hours of interrogation in the king’s office, under lock and key. Perhaps even while in shackles. “I look forward to it, Your Highness.”

“Supper will be at seven. Someone will come for you.”

Merry smiled her thanks, and the queen left her alone in the suite as she awaited the servants bringing her luggage. She took in the room again, and tears sprung to her eyes. This was so much more than she could have ever hoped. So much more than she’d expected after weeks of house arrest in Dawson’s Edge.

Perhaps Chester’s Wake didn’t intend to use and break her so much as work with her. It could be they truly forgave her for her crimes. For working toward an end that would result in their princess’s death—albeit, Merry hadn’t known Roanna possessed an anomaly at the time.

Papa had worked with the Maynes as the heads of the rebel forces in Dawson’s Edge—forces that aimed to remove the Dawson family from the throne. The rebels had one goal, and that was the advancement of the kingdom. Too long had the Dawson family’s backward practices held back the success of their people.

But Merry had trusted Princess Roanna, and the rebel band had been caught. Papa was thrown in prison, along with the Maynes and several others. Merry had been separated from her sister, Rachel, who was innocent in the whole affair. Her shy nature had never lent itself to rebel work. Now Rachel lived with a different noble family within the kingdom. Merry hadn’t heard from her in many weeks.

The unpleasant memories filled her mind, and her resolved wavered. What about Papa? She couldn’t implicate him, no matter what the Chester’s Wake royalty said. Couldn’t sentence him to life in a dungeon, no matter if Queen Charlotte treated her as an equal instead of a criminal. It didn’t matter if she was given her own suite of rooms in the palace. Her main objective was not helping the Hamiltons trap rebels. It was helping exonerate Papa, at any cost. She must free him from the dungeons in Dawson’s Edge.

She remembered the envelope she still held in her hands. It contained her legal papers. Her freedom. But she had another envelope hidden deep in her suitcase. Father had pressed it into her hands moments before the guards had arrested him weeks ago. Instructed her to hide it and keep it safe.

She would use it only if necessary.